Around Town: rise of the robots; flood control 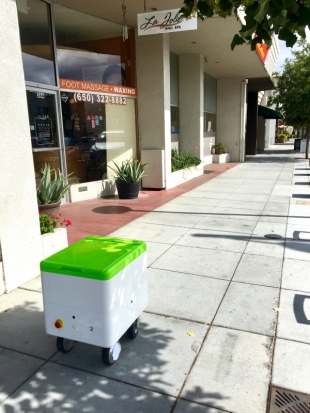 The Palo Alto City Council will consider a proposal to issue permits for autonomous robots at its meeting on Oct. 30, 2017. Photo by Elena Kadvany.

These robots seem like an exciting development. I'm very excited to live in such a technologically forward community!

The Chinese are at least a half a decade ahead of us in this area. I'm thrilled that we'd be America's top of the spear with regard to taking the lead back!

Look at the ultra-wide open sidewalks of Beijing, and then take a photo of one of those robots in a more representative stretch of narrow, obstacle-strewn sidewalk in Palo Alto. Take a walk around the Ventura neighborhood. Give us sidewalks people can actually take comfortable walks on, and I will be more enthusiastic about the robots.

On the other hand, I would love to see the technology put to good use to create autonomous lead and end vehicles for bicycle "buses" so that people who are nervous about taking their lives into their own hands on some of the main streets can feel comfortable in groups of bikes, especially kids going to school.


One more thing for our distracted drivers to worry about. So add this to the recumbent bikes with no lights or flags, the skateboarders, the regular bikes. the pedestrians, the bollards and giant Botts dots in unexpected places, the flashing traffic signals....

Report Objectionable Content
Email Town Square Moderator
13 people like this
Posted by Louise68
a resident of Menlo Park
on Oct 28, 2017 at 4:48 pm

Re: robot delivery machines:
Good grief! Those are horrible! They are not humans and thus do not have human values, and will run into people, not all of whom will be able to get out of their way.

And, as far as those robot delivery carts supposedly being allowed to go only 2.4 mph: if there is no room on the sidewalk for both a person in a wheelchair or using a walker, where will the person in the wheelchair or a walker go? And the speed is not what matters; it is the weight of the thing, and therefore the inertia it has that will make it hard to stop. And they will hit and injure people; it is only a matter of time before that happens.

When, not if, but when one of these things hits and injures someone, who is liable for the injured person's medical bills and lost wages, and other expenses? Or do the cities already have their laws written so they and the owners of those machines will bear no liability? I would be very surprised if that were not the case.

We do not need to automate jobs that people can do better. And people certainly can do delivery jobs much better than can machines.

The only things with wheels that should ever be allowed to be ridden on on sidewalks are wheelchairs and walkers. All other wheeled devices should be walked along by human beings. No exceptions.

Report Objectionable Content
Email Town Square Moderator
6 people like this
Posted by is it human
a resident of University South
on Oct 29, 2017 at 11:52 pm

To @neighbor
Your posting seems a little fishy. I wonder just who - or what - wrote it. Let's see some ID.

Report Objectionable Content
Email Town Square Moderator
2 people like this
Posted by moi
a resident of Another Palo Alto neighborhood
on Oct 30, 2017 at 1:14 pm

Regarding the flood control effort:

The great flood was only 19+years ago.

Maybe we can wait another year or two and issue another report.

Report Objectionable Content
Email Town Square Moderator
5 people like this
Posted by Louise68
a resident of Menlo Park
on Oct 30, 2017 at 10:47 pm

@ moi:
Thank you! Oops! -- it is momentum, not inertia, once an object is in motion.

Anyone want a relative in a wheelchair to have to win an argument over the right of way on a sidewalk with a heavy robot cart that won't stop?

Report Objectionable Content
Email Town Square Moderator
5 people like this
Posted by Anke
a resident of Mountain View
on Oct 31, 2017 at 8:38 am

@Louise68, your post inspires me to consider founding a startup that makes push bars for wheelchairs ;-)