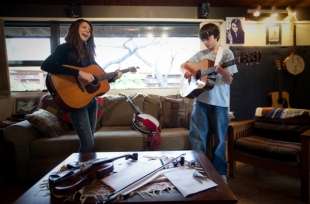 Molly Tuttle (left) and her brother, Sullivan (right), practice playing on their guitars in their family home in 2010. Molly Tuttle is the first woman to receive the Best Guitar Player of the Year award at the International Bluegrass Music Awards. Weekly file photo.