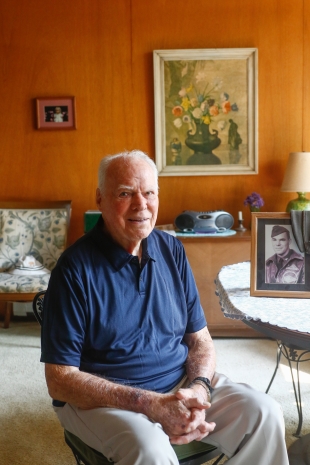 William Dinsmore, in his Greenmeadow neighborhood home in south Palo Alto, is turning 100 on Oct. 20, 2017. Photo by Veronica Weber.

A great story. Makes me feel like the worlds greatest successes are vastly under reported.

Penny is a registered user.


Uncle Bill has been a wonderful neighbor and friend to my oldest daughter since she was two years old. They met on a sunny summer day when we were out for a walk. She made a b-line for his front door (I still don't know why.) and knocked. Bill answered the door and was so friendly and kind, his house became a regular stop for her.

Bill is Uncle Bill to many neighborhood children he'd talk with while he was out gardening. He is a friendly fixture. Still lively and cheerful...at 100.

My daughter is off at college now, so she has to miss his party, but she will surely mark the day with him somehow!

We all love Uncle Bill. He is so upbeat and loving. Plus, Uncle Bill always has some great stories to tell when we stop by. We are very fortunate to have such a wonderful person in our neighborhood.
Happy 100th Birthday Uncle Bill!

Palo Alto Weekly — Thank you for this happy and inspiring story!