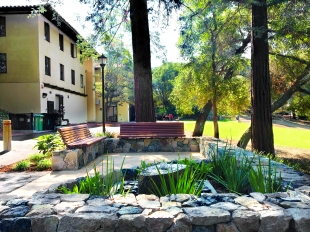 Wooden benches and a bubbling fountain have been installed at a site on Stanford University where former student Brock Turner was found sexually assaulting an unconscious woman in 2015. Photo by Elena Kadvany.

There should also be a landscaped garden and fountain at sculpture of Justice at the Law School with a plaque commemorating Judge Persky, the need for an independent judiciary and cool headed deliberations to ensure decisions are not based on emotion, revenge, scapgoating, or mob mentality, but on the law.

Oh, so sweet...and Brock is flitting around, fanciful and free... if this doesn't smell like injustice, I don't know what is. White privilege at its best. SPIT.

7 people like this
Posted by Follow the money
a resident of Another Palo Alto neighborhood
on Oct 16, 2017 at 12:29 pm

Who paid for the multi-city European frolic of Greg Scharff, Liz Kniss and Jim Keene? The City (Palo Alto residents) better not have spent 1 cent on them - not for their airfare, restaurants, site-seeing, anything.

Even if they paid every penny themselves, why a Mayor, Vice Mayor and a City Manager think they are all needed to go visit sister cities in Germany, Sweden and the Netherlands is just ridiculous. There is no justification. What if we had had a major earthquake or horrible fire in our foothills? Wouldn't we have needed the City Manager? Or some leadership?
One person going is stretching it. This is for their own selfish pleasure and not for any justifiable City benefit. This is not leadership and not responsible by any or them.

Report Objectionable Content
Email Town Square Moderator
7 people like this
Posted by Obvious
a resident of Another Palo Alto neighborhood
on Oct 16, 2017 at 1:01 pm