A place where everyone could know your name 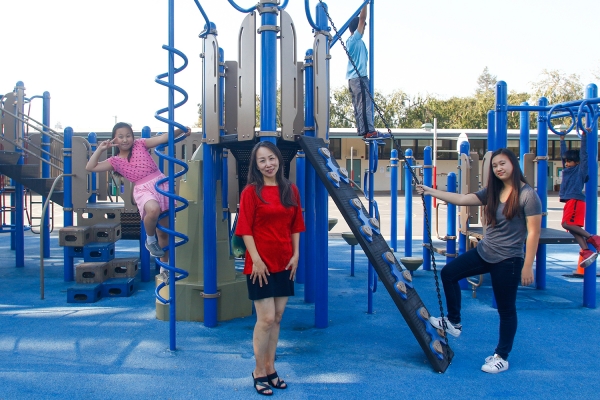 Sheena Chin, center, stands with her daughters Yonhao Fan, left, and Hanlong Fan, right, at the play structure at Palo Verde Elementary School, which she says is a community gathering point in the Palo Verde neighborhood where neighbors often meet and host parties together. Photo by Veronica Weber. 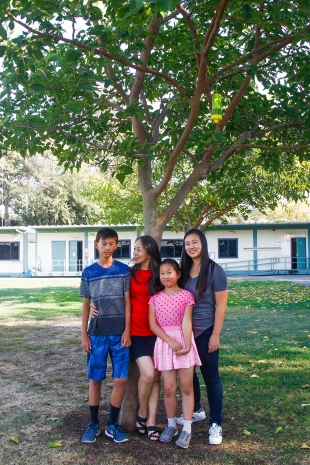 When Palo Verde resident Sheena Chin first attended an open house in the neighborhood, she was startled to come face-to-face with the home's neighbors.

"They were so friendly," she said. They introduced themselves to Chin and welcomed her to the community, offering information about the area such as locations of grocery stores, pharmacies and kids' recreation. Their warmth eased Chin's concerns about potentially moving to a new city and not knowing where to go for basic necessities.

"At that point we didn't know whether we were going to buy the house," Chin said. "But they just told us these kinds of things that seem small but mean a lot ... even though they were not sure we we're going to be their future neighbors."

Though Palo Verde is famous for its tract of Eichler and Eichler-inspired houses — modern homes designed by real estate developer Joseph Eichler and known for their open floor plans, flat roofs and floor-to-ceiling windows — Palo Verde residents from all backgrounds and occupations consistently highlight the appeal of the neighborhood as quiet, peaceful and family-friendly.

Palo Verde sits between West Bayshore and Middlefield roads to the east and west, and is bordered by Loma Verde Avenue and East Meadow Drive to the north and south. The neighborhood is known for its street plan of narrow roads and cul-de-sacs, designed to limit traffic and foster a safe environment for residents and children.

It's within comfortable walking distance from Ramos Park, Seale Park and Mitchell Park Community Center. The Palo Alto Family YMCA and Eichler Swim and Tennis Club are frequented places. Midtown Shopping Center is a short drive or bike ride away. For families, Chin said, these resources are key.

Another big plus is that Palo Verde tends to see less cut-through traffic compared to other Palo Alto neighborhoods, said City Council member and Palo Verde resident Cory Wolbach. "It is secluded in a way," he said. "We're lucky in that regard."

Wolbach grew up in Palo Verde and moved back to the neighborhood in 2012. As a child, he often played touch football in the street and biked to his friends' houses. "It's always been one of those quiet, family-friendly neighborhoods, and I think that's still true," he said. "It's nice to bump into neighbors walking down the street with their dogs or their kids."

Residents have created a culture of looking out for one another, throwing block parties from time to time and readily lending a hand to neighbors.

When the Chins are out of town, neighbors look after their house, toss newspapers into their yard and take out their trash. One even offered to drive Chin to the airport, though Chin ultimately drove herself so she wouldn't inconvenience her neighbor.

Another time, former school board member and Palo Verde resident Diane Reklis left her house to attend a meeting and accidentally left her dog out. Her neighbors "realized she was out, realized she wasn't supposed to be out, figured out who had a key, figured out who had a phone number, dropped the dog in and called us," she said. That level of concern for one another is evident throughout the neighborhood, Reklis added.

Reklis moved to Palo Verde in 1979, and from the beginning, she said, it was clear that people come from all over the world to live in the neighborhood.

"There was the private investigator with an Olympic gold medal hanging on her wall," she wrote in an email. "There were teachers, principals, librarians, stay-at-home mothers, economists and more. The man who invented the computer mouse lived on our street. ... Everyone had a story, but they were all most eager to talk about their kids' soccer teams or the Eichler Swim Team."

While the Eichlers create a non-intrusive home environment, residents don't hesitate to "bring people out and talk to everybody," Reklis said.

Neighbors hold a dog play date at Palo Verde Elementary School every Sunday morning, and unofficial get-togethers often take place at Seale and Ramos parks. Kenneth Road sponsors a Fourth of July parade in the neighborhood, and this year, Janice Way obtained a grant from the city to rent a bounce house for its annual block party.

"This is a wonderful place for our Palo Altans," Chin said. "And I'd like to contribute my time and my efforts as long as there's a chance."

The neighborhood has housed a number of public servants and local politicians, including Reklis, former Mayor Sandy Eakins, Councilmember Cory Wohlbach, and Councilmember and former school board member Greg Schmid.

According to Reklis, Palo Verde residents simply care and make efforts to get involved in whatever way possible.

"It is a neighborhood of creative, adventurous people who are interested in family and community," she wrote.

LOCATION: West Bayshore and Middlefield roads to the east and west, and Loma Verde Avenue and East Meadow Drive to the north and south

These local restaurants are donating meals to Bay Area residents in need. Here's how to help.
By Elena Kadvany | 6 comments | 11,127 views

Coronavirus: Plan ahead now for a big outbreak
By Diana Diamond | 19 comments | 4,139 views

The first few seconds after awakening; before I remember the virus
By Chandrama Anderson | 0 comments | 989 views