Indie romance explores the literal and figurative architecture of our lives 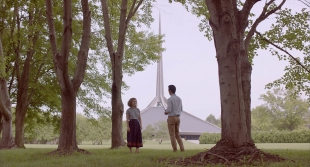 Haley Lu Richardson and John Cho star in "Columbus," a comedy about a Korean-born man who finds himself stuck in Columbus, Indiana, where his architect father is in a coma. Photo by Elisha Christian, courtesy of Front Row Filmed Entertainment.

Anne Le Ziblatt, formerly of Tamarine and Bong Su, is back with a Vietnamese noodle bar in Redwood City
By Elena Kadvany | 7 comments | 4,027 views

Can you Pay to Reduce your Carbon Footprint?
By Sherry Listgarten | 5 comments | 1,875 views

You Can Help: Scents and Migraines
By Chandrama Anderson | 0 comments | 1,684 views