Investigation involving K9 units expected to last through the evening 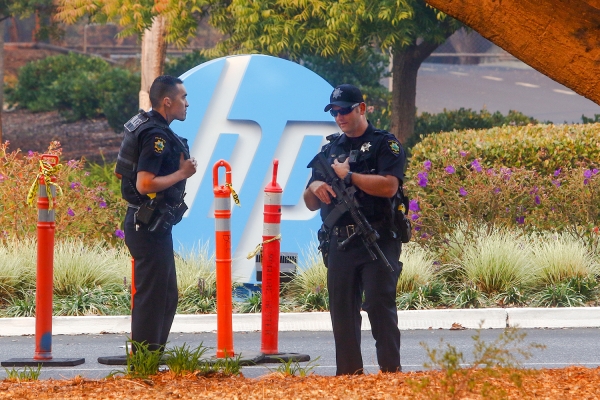 Palo Alto police officers keep a driveway to Hewlett-Packard closed to traffic at Page Mill and Peter Coutts roads as an investigation into a bomb threat at the company is underway on Oct. 11, 2017. Photo by Veronica Weber. 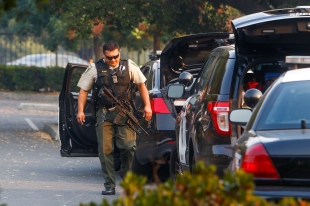 Deputies from the Stanford University Department of Public Safety responded to a bomb threat at Hewlett-Packard in Palo Alto on Oct. 11, 2017. Photo by Veronica Weber.

Like this comment
Posted by Jason
a resident of Another Palo Alto neighborhood
on Oct 11, 2017 at 6:37 pm

3000 Hanover, where the threat was directed, is the HPE (Hewlett Packard Enterprise) campus, not HP which is located just up the hill at 1501 Page Mill (although they are right next to each other).

I work at HPi up the hill from the HPE campus So why was the campus on Lock down? Who's stupid policy is this PAPD? HPE? So their idea of public safety is to close & Lock every exit but one forcing ALL employees of both campuses to funnel out 1 exit? Had this been a real active shooter everyone would have been made a defenseless victim because they could not leave. This is BS and needs to be addressed ASAP

Lock down does NOT equal Safety..period!


I guess they did the right thing, for precautionary reasons, but it bodes the question...if anyone can, and wants to make a call and cause this kind of chaos and traffic shutdown on Page Mill Rd for that long, what can be done to prevent it? I suggest there is nothing that can be done...so we will just have to live with this new world we live in, with all it's instant communications ability helping us on one hand, but having the ability to hurt us on the other hand. "A nice dilemma, we have here".

I agree with wrong report. The traffic was disastrous!

The security announced to evacuate the building at 5, and wanted all buildings clear at 5:30. It took me more than 1hour to leave the parking lot. Hypothetically, if it were a real emergency, everyone on the parking lot would be easily targeted.

Flying: How to lower your impact
By Sherry Listgarten | 11 comments | 2,554 views