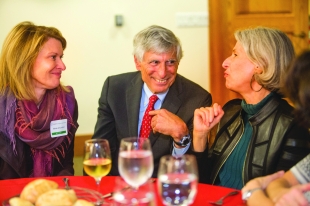 5 people like this
Posted by WorkingClassHero
a resident of Crescent Park
on Oct 6, 2017 at 11:59 am

Just because people are living longer does not mean they
are in good health ... this meme of trying to throw people
off social programs is mean-spiritied simple-minded solution
to cut social security and taxes and put even more burden on
working people, as well as increase the labor pool to reduce
wages at a time when the per-capita tax burden on the richest
Americans is being reduced under the equally false meme that
more money in billionaire's pockets creates jobs. This is an
attempt to smash and gran the whole country by people who
have benefitted the most. Maybe many of them do not see that
they have really benefited, perhaps they see it more as having
stolen it and feel the entitlement to keep their booty and use it
to cut everyone else off from exercising their franchise.

What really would help is stopping distributing false facts; as
well as our richest most powerful Americans need to realize that
we are not living in the 19th century, the economy is the ecosystem
we all live in and there is nothing moral or fair about their selfish
and arrogant wealth and power grab that cuts millions of people
out of life, liberty and any pursuit of happiness.

In our current age we need more social responsibility by the rich
and powerful, not less. Some people have too much, and the
slogan for that meme is more tax cuts for millionaire and billionaires.
The economy and the country do not work under predatory
laissez-faire capitalism.

2 people like this
Posted by Kieran McCarty
a resident of another community
on Oct 8, 2017 at 5:38 pm

It would be lovely if Stanford recognized that not all seniors who might wish to go back to school for a year have achieved the financial success required to pay Stanford tuition, but they might still bring interesting diversity to the campus community and benefit from the opportunity. How about following up on their *terrific* no-tuition program for undergraduates with very low family income by extending this wonderful program to some seniors who are otherwise qualified to whom $60,000 might represent 2 or even 3 years of *total annual income*?
I do realize Stanford is a private university and it has done a lot to make a stellar education available to poor young people... but I already have a BA so I don’t qualify for the undergrad underwriting, and at my age, unlikely to make enough in the future to pay off educational loans, I’m not going back to school anywhere if I can’t get a full scholarship.

Report Objectionable Content
Email Town Square Moderator
5 people like this
Posted by steve
a resident of Palo Verde School
on Oct 8, 2017 at 5:45 pm

this is just another way for the damn techno-elites to suck us retired folks out of our hard-earned money... BONE-DRY!

back in my day, youngsters WORKED HARD to get their money. we weren't greedy, office-slicking, computer chip munching techno elites!

they want to force us off social security, jack up retired taxes, and set the gov't 'retired' age higher to get us back in the workforce!

Report Objectionable Content
Email Town Square Moderator
4 people like this
Posted by Louise68
a resident of Menlo Park
on Oct 8, 2017 at 5:45 pm

This very expensive program completely misses the point. Many people are lonely, and they lack deep and satisfying connections to other people, and almost everyone is "time-starved". This is because almost everyone who has a job is expected to work very long hours, and at irregular and unpredictable times, and far too many people have ridiculously long commutes. Thus very few people have enough time to spend with their families, let alone friends. THIS is the biggest problem that must be addressed before most people can have the deep and satisfying relationships with others that will foster good mental and physical health.

No one needs to spend $60,000 to sit and listen to lecture about how they can find new purpose in their life. Being talked at is the least effective way to learn something. People forget 90% of what they hear, anyways.

What everyone needs is to have regular and much shorter work hours, and to be paid enough to be able to provide for a family on one income and to live within a reasonable distance of where they work. Until all of these things are done, we will continue to experience an epidemic of loneliness, with too many people experiencing the resulting poorer mental and physical health.

There is plenty of money to do these important things. It is just either being hoarded or spent on the wrong things.