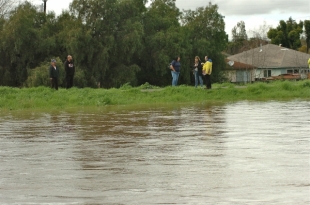 Onlookers on the East Palo Alto side of the Baylands levee along the San Francisquito Creek monitor fast-flowing water on Feb. 7, 2017. A regional agency is looking to control flooding that stems from the creek through projects that will impact Menlo Park, Palo Alto and East Palo Alto. Photo by Keith Peters.

Is it? After some brief discussion two years ago, there's been nothing since. What was the final decision on alignment and construction?

The only thing that needs to be done is dredging the creek from 101 to the bay.
The original wide and deep channel has all silted up. This backs up the water into Palo Alto. When are you idiots ever going to figure this out ?


@Ralph - Creek would have flooded at Chaucer Bridge in 1998, even if everything past the 101 was a clear concrete channel. Chaucer bridge is the biggest bottleneck on the creek, but we can't do anything about it because of bureaucracy & politics.

Report Objectionable Content
Email Town Square Moderator
1 person likes this
Posted by Ken
a resident of Midtown
on Oct 4, 2017 at 10:42 am

Report Objectionable Content
Email Town Square Moderator
1 person likes this
Posted by john_alderman
a resident of Crescent Park
on Oct 4, 2017 at 11:05 am

Report Objectionable Content
Email Town Square Moderator
9 people like this
Posted by Marie
a resident of Midtown
on Oct 4, 2017 at 12:08 pm


I'm pleased to see the San Francisquito Creek Joint Powers Authority are still looking at storing water west of 280 and slowly releasing it. The state water board held up the original approval of the current construction because that was not part of the plan. It wasn't included because Stanford, who owns the headwaters of San Francisquito Creek refused to cooperate. As usual, they are unwilling to provide any public benefit that is permanent and might possibly interfere with future development, however unlikely.

Santa Clara County should refuse to accept the current GUP proposed by Stanford unless it includes a retention basin for overflows from San Francisquito Creek. For once, they should be required, in detail, to mitigate damages to surrounding communities from flooding arising on their land. No institution should be allowed to facilitate flooding downstream of their land by refusing even minimal modifications. I guarantee a flood retention basin is much cheaper than rebuilding bridges downstream and would probably be even more effective in preventing future flooding. I support rebuilding the bridges but it seems futile when not addressing the original source of the flooding.

Palo Alto spends hundreds of thousands of dollars maintaining the upstream environment above Stanford supporter Arillaga's property in Foothills Park so as to reduce the potential of flooding on Arillaga's downstream property. Why isn't Stanford held to that same requirement for its upstream property?

Some environmentalist mandated that the creek banks needed hydro-seeding. Hydro-seeding was just completed on the banks of downstream side of 101. It does not take a rocket scientist to figure out that this would wash away after the first rain. Well guess what? It just rained! All that work down the drain. How many thousands of dollars were wasted? Probably now there will be a study conducted on the effects of the seeds that are now in the bay.

Just another case if over educated under intelligent.

Report Objectionable Content
Email Town Square Moderator
4 people like this
Posted by NoEinstein
a resident of Crescent Park
on Oct 24, 2017 at 6:36 am

-- Some environmentalist mandated that the creek banks needed hydro-seeding.

Comments like this are like fake news. "Some" environmentalist" ... that is like
I hear people are saying this or that. If you have some facts to present, how about
presenting them rather than throwing some kind of bad light on ALL environmentalists.

If it were not for environmentalists our bay would be a dried up cesspool, and the
air would be so thick you would not be able to see the other side of the bay, like
back in the 70s.

Venting your spleen over stuff you cannot confirm and do not objectively compare
with other efforts going on doesn't really help, but you get to take a dig at those
terrible environmentalists who want your air, water and land to be clean and
living - how terrible.

We have been talking about the Searsville lake dam and creek forever. We have analyzed the sludge problem and could have stopped it but due to inaction it just keeps building up. If SU is going to expand their campus then they should be required to take down the dam and redirect the water flow prior to the next big rains - at which point all bets will be off. The problem we are looking at is that the dam and lake are in the Jasper Ridge closed off area. So what is going on within that compound that requires being closed off? That is where the discussion always gets derailed. If any illegal plants are being grown in that location than that is a good reason for the secrecy as to what goes on in that location. Time to clear up this problem at the source so that the new construction and city are not held hostage by SU inaction of this topic.

Fake news? The fact is the creek was just hydroseeded. It just rained, and all the special hand picked, native grass seed, was washed out to sea. That is a fact not fake news.

All the environmental hoopla that has slowed down this project has been nauseating.

News Flash: The harvest mouse has known how to survive storms for thousands of years... The mouse does not need a special island and/ or condo to survive.

Report Objectionable Content
Email Town Square Moderator
5 people like this
Posted by Jerry Feingold
a resident of Crescent Park
on Nov 20, 2017 at 4:32 pm

When is the Bay to 101 project going to be really completed? Just got brief from someone at the Water board that that there is pending judgment by a dispute resolution board against the water district for $12 million because of screw up by their consultant, HDR? Are we taxpayers going to be left holding the bag here? This project has gone on for so long that my baby is old enough now to have her own baby. Too slow.