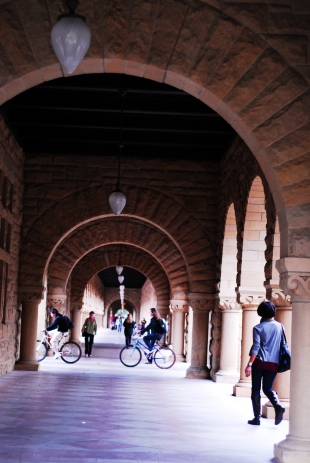 Stanford University saw a rise in sexual offenses and stalking incidents between 2015 and 2016, according to its annual Safety, Security and Fire Report. Weekly file photo.

Is anyone researching if crime is really increasing or if more victims are coming forward after Brock Turner and Donald Trump publicized these types of crimes?

How would one research assaults that were not reported? Ask around? Would the information gleaned really be useful?

@How - there are lots of really smart people right here that could develop a methodology that would at least give us meaningful insight into what is happening. If there is a conflict of interest in researching your back yard, I'm sure they have unbiased colleagues who could do the work.

Report Objectionable Content
Email Town Square Moderator
17 people like this
Posted by C
a resident of College Terrace
on Oct 3, 2017 at 3:12 pm

I hear ya student!

It's not just the publicity of that particular travesty of injustice, however, which may be driving the increase of reported incidents vs any real change. (For the record: anybody found molesting an unconscious girl behind a dumpster deserves way more than a slap on the wrist.)

We are creating society of victim/crime worship, where everyone's minor grievances and inconveniences are now classified as 'crimes'. Rape has always been rape. Violence has always been violence. 'Real' racism has always been racism (although this in itself isn't a crime). Today, however, the very definitions of these words are ever expanding. Moral equivalency is skewed beyond recognition. Disagreeing with someone's politics is now the equivalent of racism. Asking someone for a date is now tantamount to harassment. Punching someone in the face is no longer just assault. If they are a different sexual orientation, it is now a hate crime with special circumstances and added penalties.

Conversely and simultaneously, true crime is minimalized and encouraged. Brock for example. Jails releasing prisoners early. Raising the minimum dollar amount one needs to steal before it is considered a felony, etc, etc.

We combine not issuing fair judgments for truly serious crime, and at the same time dilute the meaning of criminal acts by criminalizing virtually everything. Combine this with the media sensationalizing crimes which fit a it's political narrative and sells papers and pushes an agenda, I can see how the numbers may not necessary reflect a true change in the facts.

Crimes and criminals have always existed, but the definitions are so blurred to be meaningless. Victims may believe they were victimized beyond what the facts bear out.

Conversely, the flip side is that victimizers may not necessarily see themselves as doing anything wrong if there is no longer a line between date and date rape. What's to stop them crossing that line when the moral equivalency issue has minimalized the true meaning of rape and the consequences are practically eliminated.


Report Objectionable Content
Email Town Square Moderator
4 people like this
Posted by C-
a resident of College Terrace
on Oct 3, 2017 at 3:23 pm

Report Objectionable Content
Email Town Square Moderator
2 people like this
Posted by @C-
a resident of Mountain View
on Oct 3, 2017 at 3:44 pm

Report Objectionable Content
Email Town Square Moderator
8 people like this
Posted by @@c
a resident of Barron Park
on Oct 3, 2017 at 4:19 pm

Report Objectionable Content
Email Town Square Moderator
2 people like this
Posted by @Barron Park
a resident of Mountain View
on Oct 3, 2017 at 5:16 pm

Report Objectionable Content
Email Town Square Moderator
5 people like this
Posted by Rob
a resident of Downtown North
on Oct 3, 2017 at 9:23 pm

I have never understood why Universities are responsible for, or given the authority to investigate and prosecute sexual assault cases on their campuses. It seems like such an obvious conflict of interest where the desired result has almost always been to suppress, ignore and hope it all quietly disappears.

Report Objectionable Content
Email Town Square Moderator
4 people like this
Posted by Don't you see?
a resident of Charleston Gardens
on Oct 5, 2017 at 1:36 pm

Sexual harassment is a euphemism for what these assaults are all about. It's about violence and domination of someone perceived to be weaker than the person doing the assaulting. It's a physical and mental, yes mental, attack that causes grave damage that lasts for a very long time.

If you haven't read about Harvey Weinstein and his long history of sexual harassment, do so. And do not tell me that this predator did not start early in life.

I have run out of patience with people who say "Oh, it's overblown", or "not so bad" or "accusers are lying or exaggerating." Sexual harassment should not be condoned at any point in the education cycle, from Elementary School, Junior High, High School through College. Period.

For too long the victims of sexual assault have not been supported in their struggle for justice. The backlog of rape kits across the country that have not been tested is enormous. And it's way past time for those victims, primarily women, to be heard and for justice to be done.

When a complaint is filed, at any level, the accused should be banned from the school campus until the issue is resolved. Especially if it comes to light that multiple assaults have been committed. That person should not have access to additional victims. It should be clear to everyone, male and female alike, that sexual predation of any sort is not acceptable.

Finally, all school districts should provide a robust sex education program which covers all aspects of sexual behavior. And all students should be required to take it. If parents object, then it should be made clear that they, the parents, are legally responsible if their uneducated student commits a sexual assault. They should also be required to provide proof that their student has completed an equivalent sex education course.

Again . . . sexual harassment and assault is NOT acceptable any time or anywhere.