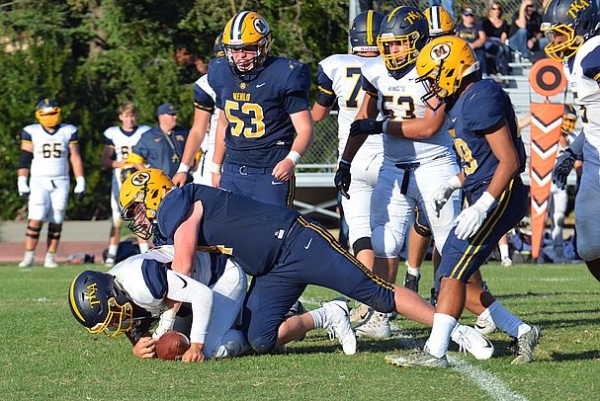 Ty Corley records one of Menlo's six sacks on the day. Photo by Pam McKenney/Menlo Athletics. 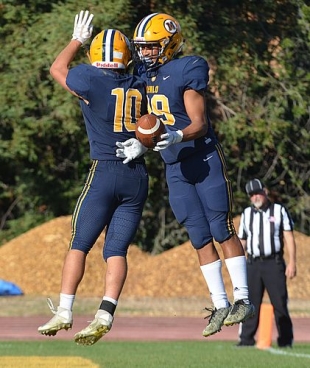 Pete Lavorado's return to Valparaiso Ave. was not a pleasant one -- in fact it was darn right frustrating.

The King's Academy varsity football coach is still looking for his first win since taking the helm of the Sunnyvale team this season, but didn't get any help from Menlo School. The hosts dismantled King's, 28-0, in the PAL Ocean Division opener for both teams.

Emilio Simbeck
Previously Lavorato had spent 14 seasons coaching Sacred Heart Prep in Atherton, which is just down the street from Menlo. His teams were 123-46-1, and earned five Central Coast Section titles.

But it's a different ballgame with King's, now 0-5.

Things got bad for Lavorato's team right from the beginning, as Menlo's senior running back -- and, let's face it, the focus of their offense -- Aidan Israelski, lowered the boom for a pair of quick touchdowns and a 14-0 lead by early in the second quarter.

Menlo's first drive featured seven Israelski runs -- the biggest for 15 yards to the King's 33. He scored on a three-yard run with 7:32 left in the first quarter to make it 7-0.

"I'll take those guys over anyone," said Israelski, who carried 17 times for 189 yards. He also caught one pass for 16 yards. The front of Brian Mhatre, JH Tevis, Bailey Deeter, Cooper Stewart and Ty Corley dominated in the first half -- most notably on Israelski's 76-yard run.

"I challenged a couple of them to step up before this game, and they responded. Before games I promise Mhatre a meal at J and J's (Hawaiian Barbecue) and now I owe him two. I'll be in debt for a while."

But Israelski does his share of the damage to defenses as well. He must have carried multiple tacklers on five of more plays on Friday.

The defense was led by middle linebacker Deeter (8 tackles) and defensive end Tevis.

These local restaurants are donating meals to Bay Area residents in need. Here's how to help.
By Elena Kadvany | 6 comments | 11,077 views

Coronavirus: Plan ahead now for a big outbreak
By Diana Diamond | 19 comments | 4,090 views