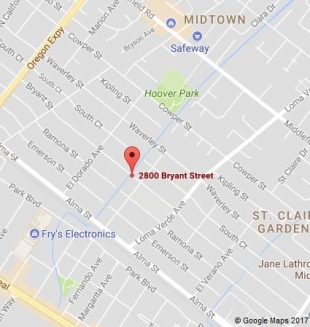 A woman was robbed of her purse while unloading items from her car in the Midtown neighborhood. Map courtesy Google Maps.

So we are looking out for two men in their 20s.??. With dark clothing.? Thats all we get.?? I live two blocks from the incident. That does not help much. But good luck with finding these waste of space. Wish we could help..

Obviously, the police are asking people with inside information to come forward. The 2 perps likely have friends and family that suspect what they are up to. Or someone may have witnessed the crime in progress or seen the two fleeing the scene. If you don't already know these two by name and did not eye-witness the crime, then the police say your speculations are not useful to them.

2 20year olds punching a 60 year old woman? Sounds like a good reason to issue more concealed carry permits in this county and even the odds.

Yes, that way two 20 y.o.'s can punch a 60 year old, take her gun, then never have to punch anyone during their future robberies.

If you imagine a dirty harry outcome, you MUST also imagine the outcome where the woman gets shot with her own gun, then weigh the benefits of being armed for that case. It's not always about more guns, each individual case may be helped or hurt by inserting guns into the equation.

Report Objectionable Content
Email Town Square Moderator
19 people like this
Posted by C
a resident of College Terrace
on Sep 29, 2017 at 11:43 am

Fact: Every year, people in the United States use guns to defend themselves against criminals an estimated 2,500,000 times – more than 6,500 people a day, or once every 13 seconds. 1 Of these instances, 15.7% of the people using firearms defensively stated that they “almost certainly” saved their lives by doing so.

Fact: Even the government’s estimate, which has a major methodology problem, estimates people defend themselves 235,700 times each year with guns.

Fact: The number of times per year an American uses a firearm to deter a home invasion alone is 498,000.

Fact: In 83.5% (2,087,500) of these successful gun defenses, the attacker either threatened or used force first, proving that guns are very well suited for self-defense.

Fact: The rate of defensive gun use (DGU) is six times that of criminal gun use.

Fact: Of the 2,500,000 times citizens use guns to defend themselves, 92% merely brandish their gun or fire a warning shot to scare off their attackers.

Fact: In most of the remaining 8% of defensive gun uses, a citizen never wounds his or her attacker (they fire warning shots), and in less than one in a thousand instances is the attacker killed.

Fact: In one local review of firearm homicide, more than 12% were civilian legal defensive homicides.

Fact: When using guns in self-defense, 91.1% of the time, not a single shot is fired.

Fact: After the implementation of Canada’s 1977 gun controls prohibiting handgun possession for protection, the “breaking and entering” crime rate rose 25%.

Report Objectionable Content
Email Town Square Moderator
40 people like this
Posted by C
a resident of College Terrace
on Sep 29, 2017 at 11:49 am

Your assuming she can't handle herself with a gun? I believe 60 yr old women can be excellent shots. Your narrow minded opinion of their abilities shows you to be a sexist and ageist. (While I freely admit, mine may have been as well... Maybe she should have just bare knuckled brawled with them.)

Report Objectionable Content
Email Town Square Moderator
16 people like this
Posted by C
a resident of College Terrace
on Sep 29, 2017 at 11:55 am

Sorry I'll be my own grammar Nazi. Clearly it's "You're" and not "Your". Spell check and texting have ruined me.

Report Objectionable Content
Email Town Square Moderator
7 people like this
Posted by Tom from Midtown
a resident of Midtown
on Sep 29, 2017 at 12:31 pm

Tom from Midtown is a registered user.

"Fact: After the implementation of Canada’s 1977 gun controls prohibiting handgun possession for protection, the “breaking and entering” crime rate rose 25%."

Fact: "Even the government’s estimate, which has a major methodology problem, estimates people defend themselves 235,700 times each year with guns."

Also fact: Perhaps the major "methodological problem" the government has is that the NRA has successfully intimidated Congress into --not simply refusing to fund -- but virtually prohibiting the funding of gun-related research (see, among many others, this LA Times article: Web Link): "Infuriated by CDC-funded research suggesting that having firearms in the home sharply increased the risks of homicide, the NRA goaded Congress in 1996 into stripping the injury center’s funding for gun violence research – $2.6 million. Congress then passed a measure drafted by then-Rep. Jay Dickey (R-Ark.) forbidding the CDC to spend funds “to advocate or promote gun control.” (The NRA initially hoped to eradicate the injury center entirely.)"

Finally, IMO, the victim in this case had only one chance to pull a gun out of her purse, and that was as the two men approached her, before they had actually committed a crime. One of them suddenly punched her and grabbed her purse. If it had a gun in it, my guess is they would have felt it; in any case it would at that point have been their gun.

Report Objectionable Content
Email Town Square Moderator
5 people like this
Posted by Anniesbiped
a resident of Midtown
on Sep 29, 2017 at 12:36 pm

What's the source of all the facts put forth by C?

Report Objectionable Content
Email Town Square Moderator
10 people like this
Posted by Novelera
a resident of Midtown
on Sep 29, 2017 at 12:37 pm


C's facts are directly from the NRA. His 2.5 million gun owners protecting themselves has been completely debunked.

Report Objectionable Content
Email Town Square Moderator
13 people like this
Posted by Oh my
a resident of Adobe-Meadow
on Sep 29, 2017 at 2:31 pm

I love how fact gets thrown out without any link or information on the group that was polled. NRA members no doubt. I'm a proud responsible gun owner and I know a lot of kooks pull their guns for what they perceive as a threat because they walk around in fear. "Someone cut me off but I pulled out my gun and avoided an escalation" I have an aunt who's always swatting at a bee she thinks she sees.
No harm if your thing is guns. People do, I know, and I like to use them to hunt, but too many morons are allowed to run around with them. That's a stone cold read it every day in the newspaper fact. Also, the NRA if for unthinking sheeple who are easily riled up for purposes of being used by those who ARE profiting greatly off your membership and toil. Know that, rugged individualists.

Report Objectionable Content
Email Town Square Moderator
16 people like this
Posted by What's wrong with saying Perps?
a resident of Another Palo Alto neighborhood
on Sep 29, 2017 at 3:30 pm

Also, a comment to @parent: I don't want a better description of the perps because I want to phone in leads to the police, I want to know in case these guys visit my neighborhood so I can pull put my gun before they punch me! Doh!

Weekly/PAPD: please give us better descriptions!

Report Objectionable Content
Email Town Square Moderator
31 people like this
Posted by Gunn Dad
a resident of Gunn High School
on Sep 30, 2017 at 11:40 am

Gunn Dad is a registered user.


The victim is reported as giving the gender, height, and approximate age of the perps, but no clue about the ethnicity? Is this sloppy reporting, or political correctness? OK, cue PC backlash against these questions...