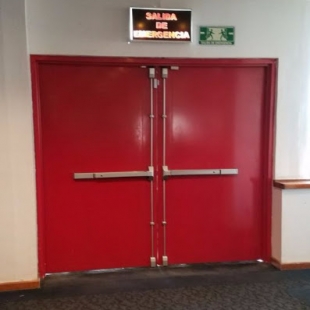 The emergency exit at a Mexico City university where a chief operations officer of a Menlo Park-based company was invited to speak at a forum when a 7.1-magnitude earthquake hit the region on Sept. 19, 2017. Photo by Janise Rodgers.

Wow, a platinum award. So you've received a trophy for "saving the environment"?
If you look at what's happened to Palo Alto, the city government deserves to be fired, rather than to receive a medal.
In Palo Alto and the bay area at large, the cost of living has gone up, while the quality of life has gone down.

This climate change obsession reminds me of Druidism. Its like we've regressed from a productive, industrialist society to a pagan culture that wants to sacrifice humans and worship Gaia. Lets stop electing druids.


This just highlights what is wrong with Liberal Progressive government. Problems in education, traffic, crime and housing do not matter as long as they get the coveted climate change trophy.

So I gather the two commenters above *like* pollution?

Report Objectionable Content
Email Town Square Moderator
6 people like this
Posted by common sense
a resident of Midtown
on Sep 24, 2017 at 5:23 am

Everyone would like to reduce pollution, but what the previous posters are highlighting are politicians and city administrators who are focused on receiving awards, rather that focused on making actual quality of life better for the residents.

I for one have to question the criteria for the award, because the city has overbuilt offices rather than housing, causing traffic congestion to get worse. Traffic congestion has been one of the biggest source of greenhouse gas, yet the city through it's building policies keeps making it worse. Then the city tries a band-aid solution by having the residents pay for mass transit passes for those employees who occupy those offices, and they get an award because of this.

@Resident, You are right on target. For example, our "carbon neutral electricity and natural gas as a standard" is a shell game. We don't produce those things, we just spend more money to source them and let poorer cities pay less for the more polluting sources.

Report Objectionable Content
Email Town Square Moderator
2 people like this
Posted by EV driver
a resident of Green Acres
on Sep 25, 2017 at 3:56 pm

If the city wants to encourage electric vehicles, they should provide a Time-of-Use option for electricity. They had a pilot program several years ago but nothing ever became of it:
Web Link

With Time-of-Use billing, EV owners are encouraged to charge at night, when electricity usage is lower.

Other peninsula cities use PG&E which offers a Time-of-Use plan:
Web Link

This is one area where Palo Alto is behind.