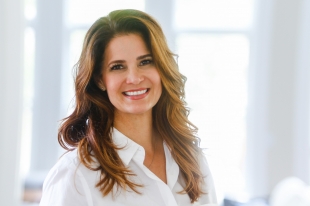 Jenny Dearborn, senior vice-president and chief learning officer for business-to-business software company SAP, has been selected as this year's recipient of the Athena Leadership Award from the Palo Alto Chamber of Commerce, an honor that recognizes the achievements of outstanding professional and business women.

"It celebrates individuals who strive toward the highest level of accomplishment — women who excel in their chosen field but who also open paths so that others may follow," according to the Chamber of Commerce, which will host the Athena Awards on Oct. 17 at the Garden Court Hotel in downtown Palo Alto.

The Chamber also will present the Athena Emerging Professional Leadership Award to Anissa Leong, corporate affairs program manager at Hewlett Packard Enterprise. This honor is granted to "a woman who demonstrates excellence, creativity and initiative in her business or profession," the Chamber states.

The Athena Award Program was launched in Michigan in 1982, and since then more than 7,000 awards have been presented to women in greater than 500 communities internationally.

At SAP, Dearborn is responsible for the learning, development, talent management, succession management and organizational development of SAP's 87,000 employees worldwide. Before SAP, she held the position of chief learning officer at SuccessFactors, Sun Microsystems and Docent and also led learning and development at Hewlett-Packard. She began her career as an instructor and instructional designer.

A leader in learning, leadership and business culture, she published her first book, "Data Driven: How performance analytics delivers extraordinary sales results," in 2015. It rose to No. 7 out of 11,000 business books published in United States that year. Her second book, "The Data Driven Leader," will be published this fall.

She also is a regular contributor to USA Today, Forbes, Huffington Post and Fast Company.

Dearborn is a champion of equality and diversity and has been recognized as one of the 50 Most Powerful Women in Tech by the National Diversity Council. She is the global executive sponsor of SAP's Business Women's Network and Pride@SAP and has been recognized by the Financial Times as one of the top 25 global executive allies to the LGBT community.

Dearborn's community service is extensive: She is on the board of directors for the Silicon Valley Leadership Group, Institute for Corporate Productivity and The Commonwealth Club, is a member of the Lucas Graduate School of Business Board of Governors at San Jose State University and was on the board at the Association for Talent Development. Through the Fortune Most Powerful Women Network, she is a mentor for the U.S. State Department to female entrepreneurs in developing countries.

A professional artist, competitive athlete and Palo Alto resident, Dearborn is married and has four children.

Athena Emerging Professional recipient Leong is manager of the Office of Protocol and California State & Local Government Relations at Hewlett Packard Enterprise. Leong oversees public-sector protocol and event execution for meetings with government elected officials and company executives. She is also responsible for the company's state and local government affairs in California and helps to develop strong political and community networks for the corporation.

Leong graduated from the University of California, Berkeley, majoring in legal studies and public policy. Upon moving to Palo Alto for work, Leong helped to jump start the Emerging Professionals in Commerce (EPIC) Young Professionals section of the Palo Alto Chamber of Commerce. To date, EPIC has more than 700 followers on social media and a regular cadre of young professional men and women from throughout Silicon Valley and San Francisco who attend the monthly networking events.

Leong is an active leader both inside her company and in the community, serving as the president of the Young Employee Network at HPE and president of the Cal Alumni Association Bay Area Chapter. She also has taught a weekly cooking class for fifth-graders at the East Palo Alto Boys and Girls Club. In 2010, Leong received the Minerva Scholarship Award through Maria Shriver's Women's Conference, which recognizes and rewards young women who have made an impact in their community and strive for excellence.

The Oct. 17 Athena Awards event will begin with a pre-luncheon networking social from 11 a.m. to noon, with the luncheon to start at noon.

Individual tickets and tables of 10 can be purchased from the Palo Alto Chamber of Commerce at paloaltochamber.com/athena-awards.

The Palo Alto Weekly is the media sponsor of the Athena Awards.


Kudos to these terrific women. We are lucky to have them in our community.

These local restaurants are donating meals to Bay Area residents in need. Here's how to help.
By Elena Kadvany | 6 comments | 11,106 views

Coronavirus: Plan ahead now for a big outbreak
By Diana Diamond | 19 comments | 4,125 views

Will the Coronavirus Save Lives?
By Sherry Listgarten | 29 comments | 3,892 views

The first few seconds after awakening; before I remember the virus
By Chandrama Anderson | 0 comments | 975 views