School board to discuss superintendent's performance 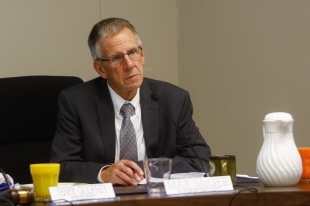 Palo Alto Unified School District Superintendent Max McGee's performance will be evaluated by the school board during a closed session meeting on Sept. 20, 2017. Photo by Veronica Weber.

The PAUSD district seems poised to continue a culture of trying to fire its way to success. [Portion removed.] It will be interesting to see if it works. So far, all is in tatters.

Will the district be better because of them? I think not.

I think you are right, the jury is still out on whether more accountability and transparency will improve results. But given how bad things had gotten in the last 10 years, with truly dreadful administrators and real harm to students, I'm glad somebody is willing to step up to try something different. What we had before sure wasn't working.

Thanks to Dauber and Collins for being willing to create accountability for the district staff. Otherwise what's the point of a school board? If making multi million dollar mistakes and screwing up sexual harassment compliance isn't enough to get you fired what is?

Although McGee promised Public Information Requests would be on the PAUSD web site, only a few are posted online.

It shows McGee's terrible choices to fill senior jobs managing legal and compliance, even when parents warned him this was the wrong person for the job. Recent reports show she was not even complying while under an OCR investigation.

Also interesting is Palo Alto High School principal complaining she was upset someone cc:d the Board on concerns, and pointing out to administrators the identity of a person at a meeting who had filed complaints.

It's all creepy, showing Administrators who do not understand the Board is in charge, that parents and community members are paying their salaries through their taxes and have a right to contact their elected Board members about subordinates work at any time.

I'm curious about how the board can evaluate principals and assistant principals. I thought the only district employee that the board has jurisdiction over is the superintendent.

Report Objectionable Content
Email Town Square Moderator
30 people like this
Posted by focus on the facts
a resident of College Terrace
on Sep 19, 2017 at 10:24 pm

Correction to this story -- the story says "McGee has also been criticized for the district's response to reports of student sexual violence at Paly that came to light this spring."

But McGee is also rightfully criticized for his failure to correctly respond to the sexual assault of a student by teacher Ronnie Farrell. Where is the goddamned Title IX investigation into Ronnie Farrell. HE'S LITERALLY IN PRISON FOR ASSAULTING A GIRL IN THE SCHOOL. IN THE CLASSROOM. WHERE IS THE TITLE IX INVESTIGATION.

That is a way more serious issue. Everyone is focused on the peer harassment but in the last five years the male principal and two male teachers were found to have sexually harassed students. One is in prison for assaulting them.

That alone is enough reason to get rid of McGee.

Report Objectionable Content
Email Town Square Moderator
4 people like this
Posted by Sanctimonious City
a resident of Barron Park
on Sep 19, 2017 at 10:43 pm

Report Objectionable Content
Email Town Square Moderator
21 people like this
Posted by Sanctimonious City
a resident of Barron Park
on Sep 19, 2017 at 10:49 pm

In the private sector it would take approximately $6.7M to fund a $200K per year retirement benefit.

Coincidentally, that is almost the exact amount Mr. McGee's alleged oversight cost the community. Maybe he could finish out his term, forgo his pension and we can call it even.

Report Objectionable Content
Email Town Square Moderator
2 people like this
Posted by @Sanctimonious Poster
a resident of Mountain View
on Sep 19, 2017 at 10:54 pm

Report Objectionable Content
Email Town Square Moderator
12 people like this
Posted by Pigs eat from public troff
a resident of Mountain View
on Sep 20, 2017 at 2:29 am

Too many administrators view their positions as opportunities to loaf and lie and eat like kings from the public troff. Watch the school board pay big bucks to get just one of them to leave with the promise of false praise that can be used to sucker another school board down the road.

Report Objectionable Content
Email Town Square Moderator
22 people like this
Posted by Keith Ferrell
a resident of Southgate
on Sep 20, 2017 at 9:37 am

Why won't this meeting be broadcast by Midpeninsula Media Center? According to MMC, the district specifically requested that they not broadcast the meeting and only record it.

Seems a bit odd. Why would the district want to limit the output of the message?

Is this part of the transparency we were promised?

Moderator's Note: According to the district, it has now arranged with the Media Center for the live broadcast of tomorrow's meeting.

Renaming schools and sanctuary district resolutions and other nonsense have been deliberate decoy activities designed to distract the public from the ongoing CYA controversies with OCR and fiscal management. McGee needs to be officially terminated.

Report Objectionable Content
Email Town Square Moderator
2 people like this
Posted by Novelera
a resident of Midtown
on Sep 20, 2017 at 3:40 pm


@Pigs Eat. If you want to snark, please spell correctly. It's trough!

Anyone see the broadcast?
What are the key takeaways?


I asked my former SJUSD parent if they would take the Administrator's job at PAUSD and I was told: " no, no, no, NO ". The situation now is VERY TOXIC to anyone that would be able to apply for such a job.

First, the MANY School Board issues, including TRANSPARENCY when having " closed door " meetings has to stop. If the Board does not like this, LEAVE!!
The PUBLIC must see the extent of the damage and how the Board is handling it. IT IS YOUR MONEY BEING SPENT HERE!! YOU SHOULD BE ABLE TO SEE WHERE IT GOES!!