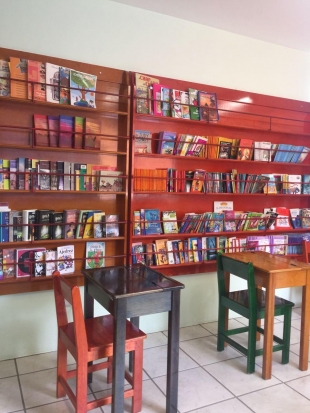 Neighbors Abroad is raising money to rebuild a children's center that included a library in Union Hidalgo, a municipality in the state of Oaxaca. The center, run by the organization Crecemos, was damaged in the Sept. 7 earthquake. Photo courtesy of Cresemos.


Neighbors Abroad like all is shocked with the news of the earthquake in Mexico City and Puebla. Given that, we still will maintain a focus on helping two devastated children's centers in the isthmus area of Oaxaca state. We believe there is power in focus.

Our local midtown business Como Esta Taqueria has started a fundraiser for relief in Oaxaca. The business is collaborating with Neighbors Abroad. Buy a delicious bowl of Pozole. All proceeds when donating more than $7 per bowl will to to support the impacted children in Oaxaca. Great to have a local business partner! On Sunday they promise a meal where all proceeds will go to Oaxaca.


The Silicon Valley Community Foundation has established a donation program for the recent Mexico City/Puebla earthquake.