Board seeks balance of hearing from community and getting through business 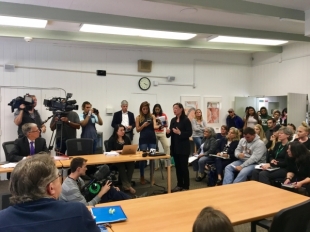 "They also discussed the value of the board's two-meeting rule, which requires members to discuss an item at least once before voting on it. Dauber said this rule is an anomaly among legislative bodies, and suggested the school board do away with it."

Agree in full with Mr. Dauber's suggestion and the logic underlying same. Over the past 27 years or so, I have attended many public hearings and study sessions in quite a few municipalities in Northern California; I've never run across a similar or identical 'two meeting' rule.


Elected officials should not forget that they work for the public.

In my opinion a 60 second time limit on public comment effectively denies the right of citizens to address their elected officials.

42 people like this
Posted by Resident
a resident of Another Palo Alto neighborhood
on Sep 18, 2017 at 6:17 pm

I would suggest that the Board Members themselves are also limited to 3 minutes each time they are given the opportunity to speak on each subject. I have been to meetings where the board members spend so much time saying very little of substance.

Report Objectionable Content
Email Town Square Moderator
6 people like this
Posted by Bob
a resident of Another Palo Alto neighborhood
on Sep 18, 2017 at 6:26 pm

Doesn't the City of Palo Alto have such a rule--at least for passing ordinances?

Doesn't discussing an item of importance and then voting on it at a later time give the voters and parents an opportunity to comment on the item via email (or paper) communications with the Board?

Report Objectionable Content
Email Town Square Moderator
2 people like this
Posted by Roger
a resident of College Terrace
on Sep 18, 2017 at 8:02 pm

@Bob, yes, I believe CA state law requires at least two readings/votes (maybe 3) for ordinances (laws), but not for resolutions. I believe that comes from the CA General Code. I think that is true in most legislative bodies - multiple readings for laws.

But for everything else (resolutions, etc.), I am pretty sure they can do what they want. For the school board, I think the rule has been that they MUST discuss EVERYTHING at two meetings, unless they waive the rule, which it seems like they can do any time they want.

School boards don't pass laws, so I'm not sure that two/three reading requirement would apply to them.

Report Objectionable Content
Email Town Square Moderator
2 people like this
Posted by doo be do
a resident of Barron Park
on Sep 19, 2017 at 7:50 am

I would've gotten away with it too, if it wasn't for all these pesky public speakers!

Report Objectionable Content
Email Town Square Moderator
2 people like this
Posted by for healthier High Schools
a resident of Gunn High School
on Sep 21, 2017 at 5:19 pm

Well, glub, glub, this is certainly better than rearranging the deck chairs on the Titanic, but still not quite at the level of redesigning those infamous water-tight compartments!

I say good for the board for taking things in hand: they are paid so little, work so hard, read so many emails, and do the endlessly hard work of listening. I think this rearrangement of their use of time has been carefully worked out and is well in order.

Still, though, to continue my maritime metaphors, I think that, when it comes to their deciding what to attend to, what key District problems to take up, they are still as if riding on a little rudderless raft, tossed to and fro by emergency and exigency and the latest unexpected problem. No one has a rudder; each has a paddle but they can't organize to pull all together in one direction or another--to focus in an in-depth, thought-through, accountable way on our most pressing District issues.

For example, last month we had the suicide of our 12th teenager in 8 years, and in an interview in the Daily Post, the boy's father, searching in sorrow for explanations, mentioned as one possible factor that his son did not enjoy school. And for decades, now, we have had community concerns about how stressful and unpleasant our high-schools are.

Yet the board cannot find a way to focus consistently on this problem--at least not in the systematic, comprehensive way of the community alliance Save the 2,008--for Healthier High Schools, which makes six specific, nuts-and-bolts proposals for changing school climate though altering basic conditions, routines, and regimens.

The board could easily set a course for change, but the board seems to engage in more quibbling and quarreling, and more splashing and clashing of paddles, than in coming together as a single-minded crew, determined to solve our most dire problems.