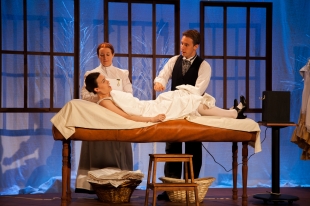 Mrs. Daldry (Ellen Dunphy, on table) isn't quite sure what to think of the medical treatment conducted by Dr. Givings (Bradley Satterwhite) and Annie (Stephanie Crowley). "In the Next Room" is playing at the Pear Theatre through Oct. 1. Photo by Michael Craig/Pear Theatre.

MyOpinion is a registered user.


We have been Pear Subscribers for years and have enjoyed nearly all of the productions, it's a hidden gem. The productions are excellent and tickets are reasonably priced. In addition it is in our own backyard (Mountain View's backyard anyway), no need to schlep up to the City or Berkeley to see great theater. They have been in their new location since 2015 and it's a huge improvement over the little 40 seat theater off of Pear Ave. This play is very good, catch it while you can. Oh and now they sell beer/wine, a recent improvement.There are too many locals who have never been to the Pear, which is amazing to me. Anyway, as you can tell, I am a fan.

A shaky plot line devolves into a tremulous attempt at ...

'Are they ready for fully innovative Indian food?' Ettan arrives in Palo Alto with chaat, caviar and a secret menu
By Elena Kadvany | 1 comment | 3,757 views

Flying: How to lower your impact
By Sherry Listgarten | 14 comments | 2,688 views