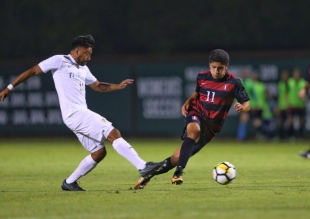 Way to go Marc. I know you have worked hard for many years and it is nice to see you playing with success in college. You were always an awesome person and talented player.

'Are they ready for fully innovative Indian food?' Ettan arrives in Palo Alto with chaat, caviar and a secret menu
By Elena Kadvany | 0 comments | 3,579 views

Flying: How to lower your impact
By Sherry Listgarten | 10 comments | 2,524 views