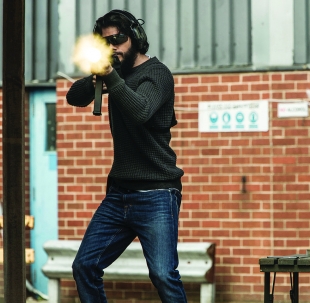 They don't make 'em like they used to? Tell that to Lionsgate and CBS Films. Their new release "American Assassin" -- based on the best-selling novel by the late Vince Flynn -- has a mindset trapped in the 1980s when Chuck Norris ruled the roost of disposable shoot-em-ups. This repulsive macho fantasy seems expressly designed to appeal to the readers of "Soldier of Fortune" Magazine.

"American Assassin" is what I call a "paperback movie," a big-screen blow-up of the mindless distractions spilling off the racks of airport booksellers. Mindless distractions have their place; heck, they're Hollywood's bread-and-butter. But the likes of "American Assassin" are downright irresponsible in stoking fear of terrorism and making a hero out of a revenge-minded raw nerve. This origin story introduces 23-year-old orphan Mitch Rapp (Dylan O'Brien in "The Maze Runner") as the victim of jihadi terrorists, who shoot up an Ibiza beach and rob him of his fiancée of five minutes.

In an utterly preposterous tall tale of American exceptionalism, Rapp immediately becomes a DIY super spy who texts and talks himself right into the terrorist cell's Libyan stronghold (O'Brien brings a grim, gym-trained physicality but, saddled with this script, comes off like Tom Cruise in training pants). A bit of machine-gunning later, Rapp finds himself in the hands of CIA Deputy Director Irene Kennedy (Sanaa Lathan), who passes him to grizzled ex-Navy Seal Stan Hurley (Michael Keaton, who shoulda known better) for his patented "Never let emotion cloud your judgement" training. Yes, Rapp's one "flaw" is losing his cool whenever there's a bad guy around.

And so "American Assassin" swiftly shifts from being extremely distasteful cultural poison to being extremely clichéd cultural poison. "He's testing through the roof -- might be the best we've ever seen...He's off the charts!" In case you were wondering, our hero also doesn't play by the rules! What passes for smarts here is making the principal bad guy a dark mirror of Rapp, another angry white dude (Taylor Kitsch) once trained by Hurley. The anti-Rapp's revenge plan involves setting off a nuclear bomb; along with the ultra-violent gun violence and brutal fistfights, the theatrics are a stone's throw from those nouveau son-of-James Bond J.B.s: Jason Bourne and Jack Bauer (in fact, Flynn consulted on a season of "24").

The thing is that "American Assassin" -- despite having competent action direction from Michael Cuesta ("Kill the Messenger") and a script with a first draft by Edward Zwick and Marshall Herskovitz -- early and often proves horribly clichéd and is insipidly tone deaf enough to make you guilty you ever enjoyed crap like this when it was a little more skillfully escapist. Rome looks fantastic, but this throwback trash with gratuitous nudity and a speedboat climax smells like milk that rotted 30 years ago. It's strictly for those who feel Tom Clancy books just aren't American enough. Hell, this one has "American" right in the title.

These local restaurants are donating meals to Bay Area residents in need. Here's how to help.
By Elena Kadvany | 6 comments | 11,123 views

Will the Coronavirus Save Lives?
By Sherry Listgarten | 29 comments | 3,901 views

The first few seconds after awakening; before I remember the virus
By Chandrama Anderson | 0 comments | 986 views