Investigators to look into whether blaze is related to Monday's lightning 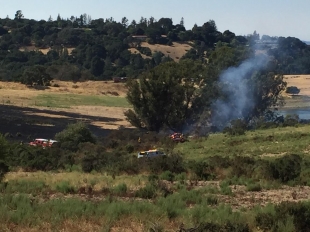 Hooray for our brave firefighters! You guys and gals are real heroes! I wish you didn't have so darned much to do right now, though. Thank you for all you hard work.

I board my mule in that pasture and was so impressed with how quickly the firefighters were able to get the fire under control. There were still firefighters out there when I left at 8:30 PM.

I thanked as many of them as I could! You don't realize how hard they work until you see them in action.