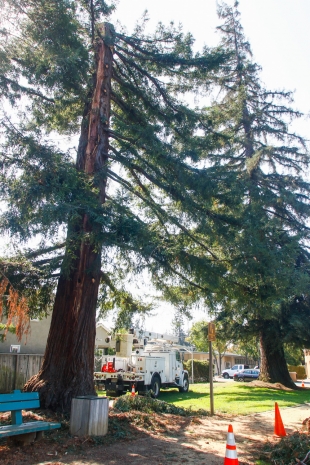 A large crack can be seen along the side of a redwood tree, which was struck by lightning during a thunderstorm on Sept. 11, 2017, at Juana Briones Park. City workers had to remove the crown of the tree, which was heavily damaged. The remainder of the tree will stay up for now and arborists will monitor its health. Photo by Veronica Weber.

8 people like this
Posted by Resident
a resident of Another Palo Alto neighborhood
on Sep 12, 2017 at 5:09 pm

Any idea why this storm wasn't forecast? TV weather people didn't mention this yesterday morning and my phone didn't show anything other than clouds for the day even after the storm started.

Most people I have spoken with were completely unprepared for this, out on bikes and walking without umbrellas. Lots of stories around the water coolers today!

"Any idea why this storm wasn't forecast?"

It was forecast during the preceding several days by the National Weather Service. Tell your TV weather "forecaster" and your phone to consult them. Or check for yourself at weather.gov/mtr

How did anyone calculate the number of bolts and strikes? Is making up numbers the same as calculating?

Report Objectionable Content
Email Town Square Moderator
13 people like this
Posted by john_alderman
a resident of Crescent Park
on Sep 12, 2017 at 10:26 pm


Report Objectionable Content
Email Town Square Moderator
2 people like this
Posted by Trooper
a resident of Duveneck/St. Francis
on Sep 13, 2017 at 11:59 am

Trooper is a registered user.


My husband biked home to Palo Alto from his job in San Jose in that storm. He arrived soaked, but he said the "light show" was spectacular.

The computer models were quite divergent so the weather bureau was reasonably cautious in their forecasts, but they did forecast a slight chance of thundershowers several days prior to the event.

"NWS gets lightning data from the National Lightning Detection Network."

Near real time lightning strike maps are posted on www.blitzortung.org. Be sure to try the sound feature.