Local first responders in Florida after driving across the country 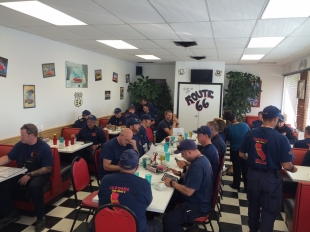 Task Force 3 members stop for breakfast at an eatery in Santa Rosa, New Mexico, on Sept. 9, 2017, during their road trip to Florida, where they've been asked to assist with the Hurricane Irma relief effort. Photo courtesy Menlo Park Fire Protection District.

'Are they ready for fully innovative Indian food?' Ettan arrives in Palo Alto with chaat, caviar and a secret menu
By Elena Kadvany | 0 comments | 3,553 views

Flying: How to lower your impact
By Sherry Listgarten | 10 comments | 2,490 views