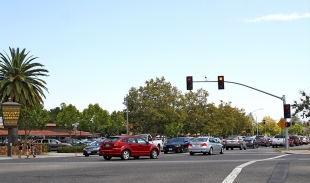 Cars block the intersection at Embarcadero Road and El Camino Real leading to Town & Country Village on July 30, 2015. A fire at the center's CVS Pharmacy has blocked access to the area this morning. Photo by Veronica Weber.

Flying: How to lower your impact
By Sherry Listgarten | 10 comments | 2,076 views