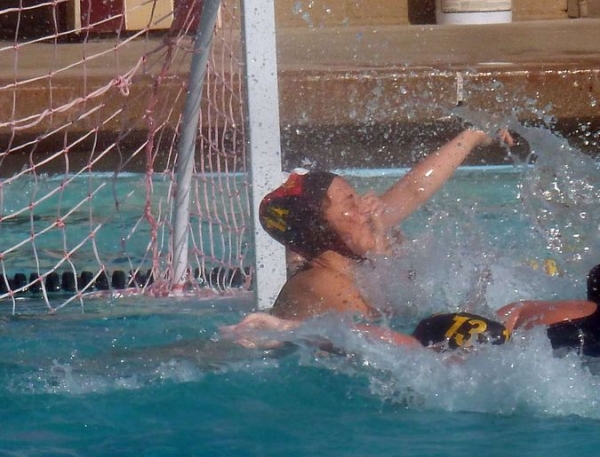 Menlo-Atherton goalie Eva Brouwer may have taken a hand to her face but she blocked this Castilleja shot. 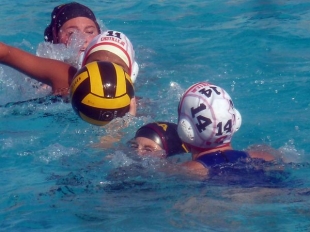 Minhee Chung (11) and Lexi Triantis (14) put the squeeze on an M-A offensive player.

Sophomore Minhee Chung scored on her first shot of the game but it still took a while for Castilleja to stretch its water polo wings against a hard-working group at Menlo-Atherton in the Peninsula Athletic League Bay Division opener for both teams.

"I told the girls that Castilleja is such an unbelievable place and there are so many opportunities but when we get to a game, they have to focus," Gators' coach Brenda Villa said. "I think that affected us in the first quarter. They will always have a million things to do but when it's time for water polo, that's where the mind has to be. What helps is that this is a cohesive group."

It helps that a majority of the players have been together for a couple of years. It also helps to have a couple of Lewis' on the same team, even if they're not related.

Georgia Lewis, who actually has a sister named Madison but she's not the same Madison who is Georgia's teammate, is fast establishing herself as one of the top goalies in an area that has produced several elite goalies.

Madison Lewis, a dependable player on both ends of the pool, added three goals against M-A.

Chung showed a natural talent for the game as a freshman and has started taking her game to the next level.

"Last year I had to keep telling her it was OK to take over," Villa said. "She's taking that on it on this year."

Castilleja plays in the St. Francis tournament on Friday and Saturday before returning to PAL action next Wednesday at Aragon at 4 p.m.

Menlo-Atherton (0-2, 0-1), with long-time water polo coach Travis Wycokoff coming out of retirement to take the reins, also took a long break between matches.

The Bears have tremendous upside and will be a factor by the PAL tournament comes around Oct. 23.

The Bears are also entered in the St. Francis tournament before playing at Woodside next Wednesday at 4 p.m.

The Knights are entered in the Acalanes tournament this weekend.

Sacred Heart Prep opened its WCAL season with a 15-3 over host St. Ignatius.

Eleanor Facey led all scorers with five goals, followed by Nadia Paquin with four and Addi Duvall with three.

On Tuesday, Mountain View knocked off host Palo Alto 12-7 in a SCVAL De Anza Division opener. Madison Menard and Malena Nguyen each scored four times against the Vikings (2-2, 0-1), who play at Los Altos at 3:30 p.m. Thursday.