McDonald has it her way in Menlo College volleyball victory 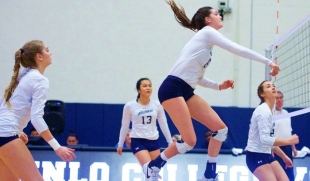 McDonald added 12 digs, a pair of aces and two blocks for the Oaks (8-3), who host Hawaii-Hilo in a nonconference match Wednesday.

Emily Sunada, Sofia Salim-Ponce and Sierra Buscher each had 10 kills. Menlo hit .283 and held the Pioneers (0-2) to a hitting percentage of .106.

Pacific Union went a 7-0 run during the first set to open a 13-6 advantage and eventually led by as many as nine before the Oaks rallied and staved off five set points before losing, 25-23.

Menlo immediately opened a 9-1 edge in the second set and never trailed. McDonald recorded five straight kills at one point.

The third set was a bit tougher for the Oaks, who were down 15-14 at one point. Kills from Buscher and Sunada, followed by a pair of McDonald service aces pointed Menlo in the right direction.

After three lead changes and four ties found the the fourth set knotted at 13, a pair of Buscher kills and a block from Buscher and Sunada gave the Oaks enough of a cushion to ride to victory.