Around Town: to the rescue; mixed signals 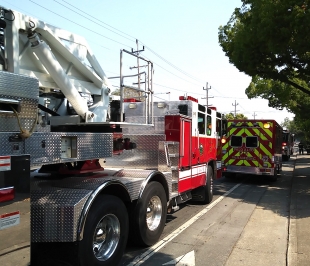 A Palo Alto firefighter has been deployed to Texas where he'll be assisting in rescue efforts related to Hurricane Harvey. Photo by Keith Peters.

6 people like this
Posted by Resident
a resident of Another Palo Alto neighborhood
on Sep 4, 2017 at 9:12 am

We have a utility pole. It is ugly and probably takes something from the value of our home.

We have very poor signal, which probably takes something from the value of our home. I often see neighbors outside on their phones because they can't get a signal in their homes.

There are many areas in town with extremely poor signals and this is supposedly the hub of high tech in the world. Please get these boosters up and running as soon as possible.

How many of the hypocrites that hate cell phone towers own cell phones themselves? How do they think cell phones work? Or do they just want them moved to in front of someone else's house?

"Feds don't have the money anymore but they have asserted themselves, particularly in the area of telecommunication, and pre-empted at (the) national and state level the authority of local communities to regulate the telecommunication issues," Keene said."

Neighbors: I do not know if this is true or not. But what I do know is that during the Maybell public debate in City Hall, the City Attorney stood up in front of the public and tokd everyone there was a state law that tied the hands of the Council so that they had no choice when it came to any proposal (even one that was mostly for-profit as Maybell was) that included affordable housing. She was very clear that state law meant they had no choice, and Councilmembers echoed this.

So some of the neighbirs looked up and read the law. It specifically and clearly said that the law did not appky to rezoning decisions; it was clearly not intended as a bludgeon in rezoning decisions, because rezoning has so many ramifications.. It did not apply, and it did not take a law degree to see that. The City Attorney and the Council were relying on our trusting that what they said was true and that we would not look up the law ourselves. A neighbor wrote them and pointed this out, as if it took that to see when the law very directly said that what they were claiming didn't apply. The City quietly dropped that line of bludgeoning and did not bring it up again.

That is but one example of many. They want to say, don't nlame us, outpr hands are tied!

To those who oppose this plan: I do not know if Keene is telling you the truth. But if this is an important issue, and what you decide to do rests on whether what he said is true, then read the law and how it really applies carefully for yourselves. The City Staff have a history of making misleading statements in exactly these kinds of situations, to try to end what are legitimate and possibly successful efforts by citizens that would interfere their plans. Do not trust what the City staff or Council tell you about what the law says in any sphere, even whether something is within zoning. They are often taking an extreme interpretation or just telling an outright lie like the above situation.

Are these 93 towers intended to create good reception for residents, or is it almost entirely catering to a corporate contingent that is rapidly taking over Palo Alto in ways that do go against state and local codes and rules? Could they be serving to make Palo Alto some kind of regional broadcaster, because Palo Alto is now the easy mark around the Bay for corporatizing civic assets? Maybe you wouldn't win on a purely health-related argument, regardless of the rule, but you may have other recourse if the plan is overkill and intended to mainly serve corporate interests (for a convenience rather than a true need). If you delve into those aspects, you might find recourse and partners around town.


Report Objectionable Content
Email Town Square Moderator
8 people like this
Posted by resident
a resident of Professorville
on Sep 4, 2017 at 12:33 pm

These micro-transmitters that Verizon is proposing are low-power with limited-range (like a few blocks), right? Arguments about turning the city into a regional broadcaster are covfefe-level dubious.

I have attended a few of Verizon's public meetings regarding the "micro" cell sites.

What I have never seen at these meeting is a representative of CPA Utilities. It is my understanding that the utility poles are owned by CPA and they provide an easement for other utilities to use these for conventional telephone and cable TV.

Looking at the proposed installation, I would say that there needs to be some serious engineering work done to convince me that the additional weight of the cell sites will not result in significant damage to the utility poles in the event of an earthquake.

It comes to reason that if you place 500 lbs of electronics,antenna, and metal casings 30' into the air, once the pole starts to sway it will simply crack at the base. Wood utility poles were never designed for these loads.

This truly is a public safety issue.

Report Objectionable Content
Email Town Square Moderator
11 people like this
Posted by Nancy
a resident of Old Palo Alto
on Sep 4, 2017 at 2:26 pm

Complaining about loss of property value?!?

Guessing the typical complainers are 65+ and bought their home 20-30 years ago for 800K to 1.2 million and now they are worth four to nine million.

Is a tower gonna reduce it 100k? No, 'cause the buyer better buy that Old PA home before someone else does...