Spare the Air alert Sunday due to excessive smog

Public advised to take precautions to protect their health 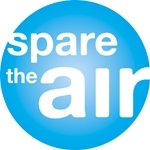