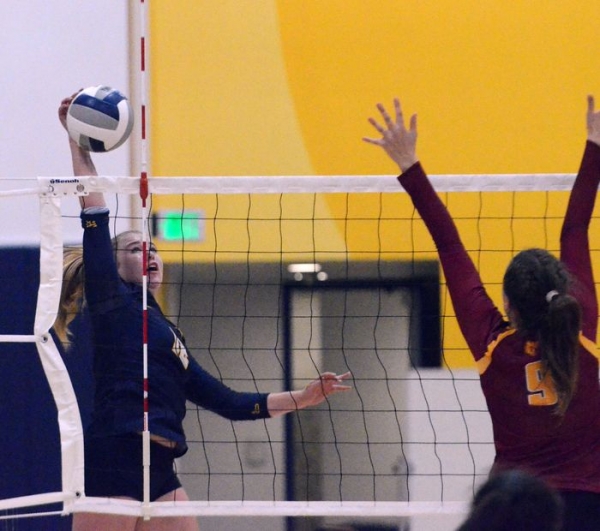 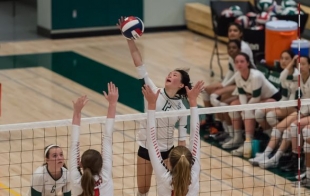 Chelsea Fan hits the ball over the net for Palo Alto as Mallory Kuppe looks on. Photo by David Hickey.

The defending state Division IV champions Menlo School beat Menlo-Atherton for the first time in four years in girls volleyball, earning a 26-24, 25-12, 25-21 victory over the visiting Bears on Thursday night.

Knights senior Kristin Sellers led the way with 11 kills on 15 attacks, a .733 hitting percentage. She also added 21 assists, 12 digs, a pair of aces and two blocks.

In other matches, Palo Alto christened Peery Family Center with a 25-9, 25-9, 25-15 victory over Gunn and Castilleja was swept by host Soquel.

Senior Josephine Tonga recorded seven kills on 13 attacks for a .538 hitting percentage for M-A (0-2), which is going through an adjustment period under first-year coach Jairo Sierra, who is tasked with shaping a team that has three seniors on its roster. The Bears reached the state Division I championship game last year.

Menlo (5-2), with the return from Argentina of junior Selina Xu from her stint with the United States youth national team, has a more experienced team with several key players returning.

Xu, who was limited to two sets Thursday, started USA's final match against host Argentina on Sunday. The Americans finished eighth at the FIVB U18 World Championships.

"It was fun to play our friends and our rivals," Houghton said. "The second game we came out with more energy after that first game which we almost lost. Overall, we played really well together. We have good team chemistry; we're all really good friends and close. We know what we can do on the court."

The competing coaches are also friendly as both Sierra and Menlo's Marco Paglialunga coached together at the Palo Alto Volleyball Academy.

The Knights out-hit the Bears, .198 to .100, but M-A held a 10-8 advantage in blocks, with junior Alicia Letvin recording five of them. Tonga added three. Senior Eva Herr had three for Menlo.

M-A senior Lauren Heller had seven kills and produced two aces on a 13-of-13 effort from the serving line. Senior Nicole Kang was perfect on 12 serves.

The Bears, who were 1-4 at one point last year, travel to Valley Christian for a match at 6:30 p.m. Tuesday.

Palo Alto (2-1) hosts Spikefest I champion St. Ignatius at 6:30 p.m. Wednesday. The Wildcats are coached by David Huan, who was formerly at Palo Alto.

Coronavirus: Plan ahead now for a big outbreak
By Diana Diamond | 19 comments | 4,109 views

Will the Coronavirus Save Lives?
By Sherry Listgarten | 29 comments | 3,868 views