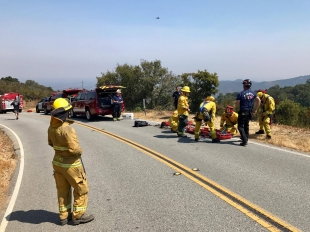 Firefighters setting up a low-angle rope rescue off of Page Mill Road where a car landed 50 feet down on Sept. 1, 2017. Photo courtesy Palo Alto Fire Department.

Wish the woman all the best! I have driven in this road (between Page Mill / 280 cross section, and Page Mill / Skyline Blvd cross-section) almost every Friday afternoon and night, to enjoy hiking in various open space reserves. Sometimes I think I probably drove too fast, but lots of times I seem to be the bottleneck actually, as I have to constantly pull over for impatient drivers to pass by. I hope people can concentrate, slow down, and drive safely, especially in such curvy road.

She's lucky firefighters were able to locate her in a timely manner, thanks to GPS. It was so hot yesterday (107) that in addition to her injuries, she could have died from the extreme heat if she was not able to move. I wish her a speedy recovery!