'Constellations' explores a multitude of romantic possibilities and parallel worlds 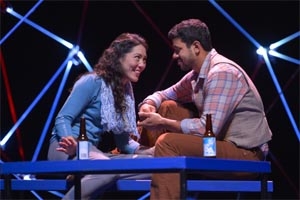 Cosmologist Marianne (Carie Kawa) and beekeeper Roland (Robert Gilbert) get acquainted in the romantic drama "Constellations," which runs through Sept. 17 at the Mountain View Center for the Performing Arts. Photo by Kevin Berne