Man follows 7-Eleven employee in car, rear-ends her and takes thousands of dollars 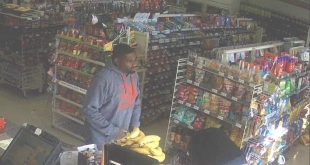 A man seen on security footage at a 7-Eleven store in East Palo Alto is wanted for a collision and strong-arm robbery on Aug. 28, 2017. Photo courtesy Palo Alto Police Department.

Did the perps see the victim carrying money out of the store? Or did the perps somehow have inside knowledge about that she would be transporting money at that day and time? Seems unlikely to be a crime of opportunity if 2 perps were involved and they covered up their license plate beforehand.

Great photo of one of the robbers. I say they are in custody within 24 hours.

Please read the article before commenting.

They got enough money to go on a little spending spree before they go to prison. Not a good return on investment.

Report Objectionable Content
Email Town Square Moderator
5 people like this
Posted by Careful with collisions
a resident of Barron Park
on Aug 31, 2017 at 11:03 am

This crime happened to me years back when getting off 101 to Charleston in a dark area before there was a Costco and In N Out. When I saw the dope crazed monsters I threw them my wallet, which they pounced on like the hyenas they were, allowing me time to escape with my young baby and wife. The following day they repeated the crime and the victim struggled with them ending up knifed and fighting for life. Always check before you get out of the car...it may be your last chance.