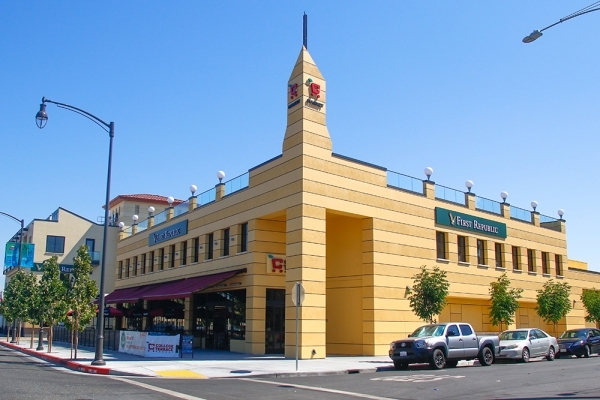 New Mozart School of Music will be moving to College Terrace Centre, which opened in the spring. Photo by Veronica Weber. 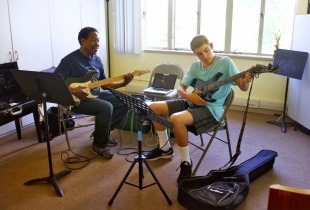 Guitar teacher Vincent Spaulding teaches Grant Rolston, 14, some new chords during a guitar lesson at the New Mozart School of Music on June 21, 2017. The school is one of about a dozen First Baptist Church tenants issued notices for violating zoning code. Photo by Veronica Weber.

6 people like this
Posted by Resident
a resident of Another Palo Alto neighborhood
on Aug 30, 2017 at 10:03 am

Good luck with the parking. I couldn't find the underground parking when I tried to use the new College Market. Traffic might be impacted too if people stop to drop off or pick up kids without parking.

dianajill is a registered user.

Hall of shame.
Something should have been worked out.

For god sake, it's a music school.
Bad karma.

16 people like this
Posted by The behavior that caused people to complain
a resident of Duveneck/St. Francis
on Aug 30, 2017 at 5:17 pm

The behavior that caused people to complain is a registered user.


I went to an appointment at 5pm last Thursday. Driving by the Baptist Church, a mom stopped in the driving lane on Cal Ave heading west (in front of the church), a young girl jumped out of the SUV, the driver then made a U-turn at Cal Ave and South Court going into the East bound bike lane and onto the sidewalk, narrowly missing a pedestrian. That is the kind of dangerous behavior that caused neighbors to complain. I've seen similar behavior over the past year or so, it is always young girls jumping out (though usually their drivers pull over into the parking strip on Cal Ave, then make U-turns after discharging their students) so I suspect it's iSing, since it is an all-girl singing school.

Report Objectionable Content
Email Town Square Moderator
15 people like this
Posted by nice location
a resident of Evergreen Park
on Aug 30, 2017 at 6:41 pm

I hope this new location works well for Ms. Shin and her students are happy in the new location, which seems very nice, particularly with the underground parking. Perhaps parents can be encouraged to shop for groceries at the College Terrace Market during their children's lessons. Hopefully the rental cost isn't much higher than at the more residential Cal Ave location.

Report Objectionable Content
Email Town Square Moderator
12 people like this
Posted by Bottom Line
a resident of Palo Verde
on Aug 30, 2017 at 10:00 pm

Christine was told she needed to move quickly to save her school, tried to do the right thing, and got the short end of the stick. New Mozart belongs at First Baptist. The city goofed, and should help her get whole over time. Manageable traffic issues should not cause a teacher to have to risk her house. The right sharing of resources that Rev. Mixon has been doing now is apparent. Palo Alto parents should support New Mozart, even if she needs to charge more now.

Report Objectionable Content
Email Town Square Moderator
3 people like this
Posted by Scotty the Boot
a resident of College Terrace
on Sep 1, 2017 at 11:19 am

It's called the FIRST REPUBLIC BANK center, not the College Terrace Center. Can't you see the SIGNS?!

Portland's Thai food darling Pok Pok will be popping up on the Peninsula this spring
By Elena Kadvany | 2 comments | 3,524 views

Flying: How to lower your impact
By Sherry Listgarten | 18 comments | 2,922 views