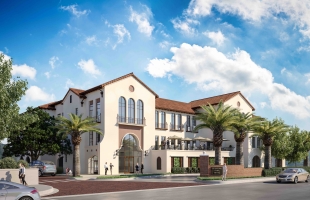 A rendering of one of Stanford's proposed office buildings along El Camino Real in Menlo Park. The architectural plans received positive remarks from planning commissioners. Image courtesy of Stanford University.

>Jean McCown, told the commissioners that ultimately, Stanford is designated as a tax-exempt academic institution by the state of California, and the university does not plan to distribute funds "as though we are not tax exempt," she said. "That's not a place we can go."

The same Jean McCown we have had to contend with in Palo Alto for so many years. From the City Council went directly into working for developers. Very familiar lawyering for the big bucks clients.

Any plans to accommodate the RV dwellers, the Stanford construction workers, those patients and their families being treated at Stanford Hospital -- all those who can't afford the $300+ a night hotels cropping up?