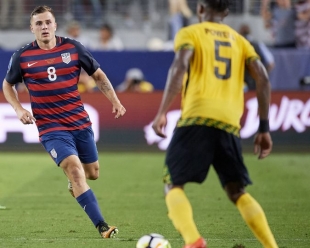 Seattle Sounders forward and two-time Stanford All-American Jordan Morris was named to the U.S. roster for its upcoming World Cup Qualifiers against Costa Rica and Honduras.

Morris was the hero for the United States at the recently concluded Gold Cup, scoring the championship-winner in the 88th minute of the final against Jamaica. The strike was the latest moment in what has been a banner 20 months for Morris, who has now won titles at the collegiate, professional and international levels.

The 22-year old is the U.S. Men's National Team's second-leading scorer in 2017 with four goals and has scored five times in 22 career caps for the United States.

Morris and the USMNT face Costa Rica in New Jersey on Friday before traveling to San Pedro Sula to face Honduras next Tuesday. With eight points in its last four World Cup Qualifying matches, the United States has climbed into third place in the Hex.

Morris has scored three times in 22 matches for the Sounders this season. He was named MLS Rookie of the Year during his debut campaign a year ago after scoring 12 times, a record for a U.S.-born rookie.

His six game-winning goals were second in the league and a MLS rookie record and Morris came up big in the playoffs in leading Seattle to its first MLS Cup title.

A Pragmatic Approach to A Trillion Trees
By Sherry Listgarten | 4 comments | 4,050 views

Singapore's oldest cafe was about to open in Palo Alto. Then, the coronavirus hit.
By Elena Kadvany | 1 comment | 3,239 views

Repairing a Disagreement with your Beloved & “Physical” vs. “Social” Distancing
By Chandrama Anderson | 2 comments | 2,725 views

The University of California’s flexible policies during COVID-19
By John Raftrey and Lori McCormick | 6 comments | 2,660 views