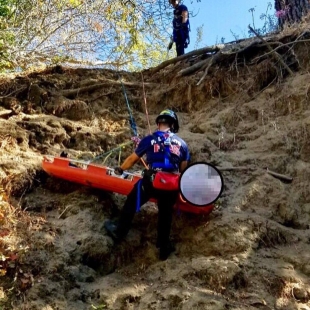 A Palo Alto firefighter helps bring a man back to higher ground after falling 30 feet down into a dry creek bed on Aug. 26, 2017. Photo courtesy Palo Alto Fire Department.

That creek bank is slippery and unstable, always caving in. Stay at least 2 feet back from the visible edge.

The one firefighter is wearing a hard hat. The other two should be too. Never know what could fall on you from a steep hill.

Why is fencing between Palo Alto Avenue and Creek so inconsistent ? Fencing prohibits walkers and bikers from venturing too close to that cliff. Some places are unfenced and you can walk a few steps from the roadbed to the edge of the Creek that drops down 20-30 feet.i never understood the City of Palo Alto allowing this hazard. Takes a lot to get their attention.

Plus, many homeless camp in their vehicles overnight along the creek. Can't you imagine a sleepy homeless person getting out of his vehicle in the middle of the night and falling into the creek, and no one sees him?