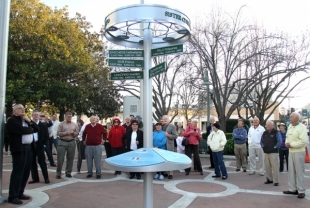 Palo Alto has found its seventh sister city in Heidelberg, Germany, which signed a "Smart City Partnership Agreement" with the city in 2013. Weekly file photo.

Amazing. Every other school district did this years ago. We just figured there was a sweetheart deal between PAUSD and Palo Alto Utilities that prevented this RFP.

Better Late Than Never! This is a positive step for our schools and the environment. Hopefully the teachers can use this as a teachable activity for even greater effect!

Gunn's parking lot is very large, and wide open with essentially no trees, yet not on the list?

Should have the robotics students install the solar panels for class credit.

Essentially every other public high school in the area has their parking lots covered with solar panels.

Now I realize after re-reading the article that PAUSD is only planning to install the solar panels on existing building roofs. Why can't PAUSD be more intelligent?