Chef in the house 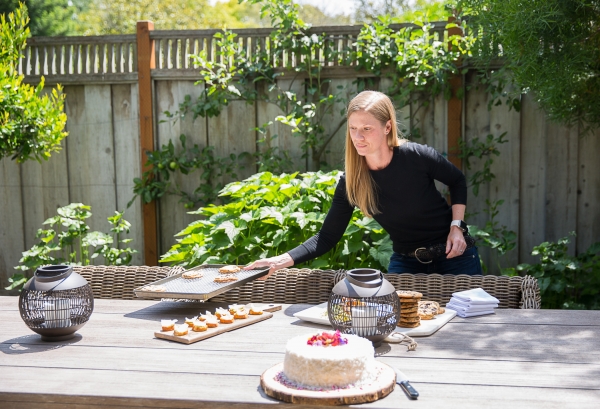 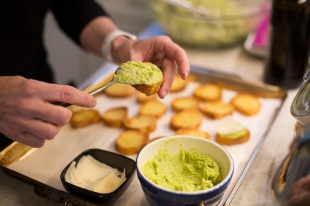 Andrea Potischman assembles one of her recipes: fava bean dip on crostini. Photo by Michelle Le.

In a blogosphere saturated with mommy and cooking blogs, a blog launched several months ago by Menlo Park resident Andrea Potischman, called Simmer + Sauce, might look like just more beautiful foodie fodder for your Pinterest. But that's only because you haven't tried her coconut cake.

Prior to moving to Menlo Park in 2009, Potischman worked as a classically trained chef in New York City. Her route to the kitchens of world-class restaurants wasn't a traditional one, she said.

Initially, she planned to be a lawyer. She studied political science at the University of Madison-Wisconsin and, after college, worked for several years as a paralegal at a law firm. Following some prodding by her mother, she enrolled in a six-month culinary program at the French Culinary Institute instead.

She landed an internship at the prestigious Montrachet restaurant in New York City. Next, she got a position in the kitchen at the Century Association, a well-known private literary club in midtown New York City. The experience, she said, was a trial by fire -- literally. She was placed in the role of saucier, cooking trays of meat and fish, and without guidance, often emerged with burns on her arms.

The kitchen was all-male, and many of her coworkers were men who had worked their way up from being dishwashers. Getting a job she wasn't prepared for just because she had a culinary degree didn't earn her any favors among the kitchen staff. She was left to carry hefty equipment by herself and assigned to be the pastry chef on top of her other responsibilities because she was the only female in house.

But over time, she said, the men in the kitchen began to accept her as a member of the staff and she came to be considered part of the family.

"You have to really want it and pour your heart and soul into it," she said."Eventually people see the grit and embrace you."

After spending four years working in a kitchen under three chefs, she transitioned into restaurant management. There, she logged long, odd hours, typically working from 4 p.m. to 5 a.m. After a year, she transitioned into other food-related enterprises: catering, testing recipes and moonlighting as a cooking instructor. She said she helped test recipes for the 75th anniversary edition of the cooking encyclopedia "The Joy of Cooking."

In 2009, she moved to Menlo Park with her husband and young son and decided to step away from the restaurant world. She now has another son -- and three dogs -- and, in recent months, started her food blog.

Potischman said her blog is geared toward the home cook -- it has "reasonable" ingredient lists, offers recipes appealing to both young and old, with dishes kids would want to cook and eat, and a cocktail section for adults.

As a parent, she said she hasn't shied away from introducing her children to a range of culinary opportunities. She's teaching them to cook and to appreciate good food. She also does not believe in tricking kids into eating their veggies. During a recent visit to see her cooking in action, one of her kids, Eli, 12, wolfed down gazpacho as an after-school snack.

Potischman said she knows her recipes work, and she's honest about them. Sometimes, she noted, other chefs may alter details in recipes to keep their secrets.

She said someday hopes to publish a cookbook of her recipes.

"Blog followers sometimes stop me in the store or send me an email and tell me that their whole family is now eating one of my dishes. That is what it's about," Potischman said.

The most common question Potischman is asked is: "How do I tell when my chicken is done?"

Her answer: Test it with your hand to see if it is firm and springs back.

She offered other cooking suggestions:

Be organized. "You can make anything if you prep in advance," she said.

When hosting, don't use a new recipe for the first time. New, untested recipes have a high failure rate, and there are a lot of bad recipes out there, she said.

Just try it. Cooking is pretty forgiving, and everybody has to eat. Food unites people, and it doesn't have to be a hard or elaborate dish to pull off to impress people, she said.

• Salt and pepper to taste

• 24 thin shavings of Parmesan for garnish

1. Pre-heat the oven to 400 degrees F. Line a baking sheet with parchment paper and set aside.

3. Slowly add the olive oil and pulse to incorporate.

4. Season to taste with salt and pepper. Set aside.

5. Using a pastry brush, lightly brush one side of the sliced bread. Place on the prepared baking sheet and lightly toast for about 8 to 10 minutes.

6. To serve, spoon a generous amount of the fava bean puree on the toasted bread and top with a shaving of Parmesan cheese, using a vegetable peeler to make thin shavings.

3. Using an electric mixer fitted with a whisk attachment, beat the butter, sugar and cream of coconut until fluffy. Beat in the egg yolks and vanilla extract.

4. On low speed, beat in the dry ingredients and then add buttermilk and beat until just blended.

5. Place this batter in a separate large mixing bowl. Clean your mixer bowl and whisk attachment.

6. Beat the egg whites with a pinch of salt until stiff, but not dry.

7. Using a spatula, gently fold the whipped egg whites into the batter.

8. Divide the cake batter between the two prepared pans. Bake the cakes on the middle oven shelf until a tester inserted comes out clean, about 40-45 minutes.

9. Cool the cakes in their pans on racks for 10 minutes.

10. Run a small knife around the pan sides to loosen cakes before turning them out onto the racks to cool completely.

11. Trim the cake layers before frosting and coating in coconut. Cake should be stored in the refrigerator.

1. Place the cream cheese in the bowl of an electric mixer fitted with a whisk attachment. Beat on medium speed until fluffy.

2. Add the butter and beat to blend, about 1 minute.

3. Add the powdered sugar, sweetened cream of coconut and vanilla extract and beat on medium until well blended and smooth.

For more cooking tips and recipes, go to simmerandsauce.com.

These local restaurants are donating meals to Bay Area residents in need. Here's how to help.
By Elena Kadvany | 6 comments | 11,101 views

Coronavirus: Plan ahead now for a big outbreak
By Diana Diamond | 19 comments | 4,119 views

Will the Coronavirus Save Lives?
By Sherry Listgarten | 29 comments | 3,886 views

The first few seconds after awakening; before I remember the virus
By Chandrama Anderson | 0 comments | 971 views