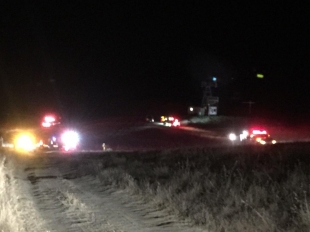 Fire crews remain at the Stanford Dish following a grass fire that broke out during the late-night hours on Aug. 22, 2017. Photo courtesy Palo Alto Fire Department.

Is the bird okay?

Just got back from hiking the Dish, all gates are open.

Story makes it seem like a huge fire/production, not the case. The small area that burnt is view able from the loop near the small dish that usually aims straight up.

Report Objectionable Content
Email Town Square Moderator
1 person likes this
Posted by Peninsula Commuter
a resident of another community
on Aug 23, 2017 at 2:47 pm

A lawsuit should be filed against the estate of the bird to recover the costs associated with fighting this fire and repairing the PG&E power line. Thanks to the fire fighters for getting this under control so further damage was prevented.

Report Objectionable Content
Email Town Square Moderator
7 people like this
Posted by Peninsula Commuter
a resident of another community
on Aug 23, 2017 at 5:44 pm

All joking aside, glad no people were hurt and no property destroyed. This could have ended up much worse.

Check out the photo of this hawk/snake combo that caused a fire this week in Montana: Web Link