Oaks split a pair of volleyball matches in Rocklin tourney 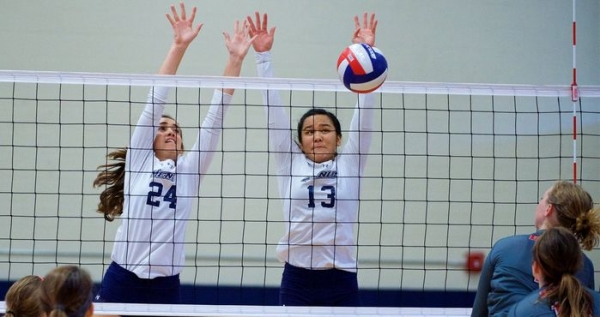 The Menlo College women's volleyball team, in splitting a pair of matches at the William Jessup Invitational on Thursday, exhibited two qualities that have led to success in the past.

The Oaks (3-1) have a chance to catch their collective breath. They don't play again until Wednesday at UC Merced. Menlo hosts the Bobcats in its home opener on Aug. 30.

The score of Menlo's match with the Warriors is a clear indication of how it played out. Both defenses were spot on. Life Pacific had a slight advantage in hitting, .123 (179 attacks) to Menlo's .089 (on 192 attacks) but that's what is to be expected in such a close match.

Menlo opened the first set with an 8-3 advantage thanks to several contributors, highlighted by a pair of blocks from Maggie McDonald. From that point, the Warriors outscored the Oaks 16-7 to pull ahead at 19-15.

Bailey Gamez recorded an ace and a kill and a pair of big kills from Kenzie Carpenter tied it at 22. The Oaks eventually took a 28-27 lead but the Warriors took the next three points to escape with a win.

During set two, neither team led by more than three points to a 20-all tie. Life Pacific took an advantage of a Menlo timeout to regroup and take eight of the final 10 points.

A timeout aided the Oaks in the third set. Menlo trailed 15-13 when Buscher went to serve out of a timeout and helped with seven consecutive points. Moea Kekauoha and Maggie McDonald helped Menlo finish the set on a 12-3 run.

The Warriors eventually held a 26-25 lead in the fourth set but Menlo staved off match point to force a fifth set, which is when Life Pacific took a close, 15-12 decision.

In game two, Menlo opened an 11-2 lead against the Pioneers, thanks in large part to Bailey Gamez.

The senior provided a kill and two service aces over that impressive opening run, while Emily Sunada also contributed with two kills of her own.

That was more than enough of a cushion for Menlo, as they never saw their lead get smaller than eight points over the entire set. Another Gamez ace in the final points helped set up a four-point run to close out the opening set 25-13.

The remaining sets proved a little more challenging but Menlo managed to hang on.

These local restaurants are donating meals to Bay Area residents in need. Here's how to help.
By Elena Kadvany | 6 comments | 11,074 views

Coronavirus: Plan ahead now for a big outbreak
By Diana Diamond | 18 comments | 4,084 views