Man struggles with woman for purse at Stanford Shopping Center 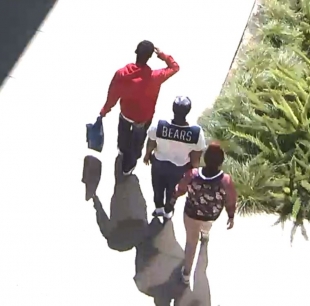 A man wanted for a strong-arm robbery and his two female acquaintances are seen on surveillance footage at the Stanford Shopping Center on Aug. 13, 2017. Photo courtesy Palo Alto Police Department.


If you are a victim of a crime, or see a crime, please call the police immediately. Every minute counts.

This does not sound right. Why would she just follow the thieves around the shopping center and not report it to police for three hours?! This sounds like a scam.

Oh, really? I can't imagine a 60-year old woman tailing 3 thieves through the shopping center, to El Camino, then waiting 3 hours to report the theft to the police. How phoney does this sound!!

Remember folks, the purse contained her cell phone, and other personal items, perhaps like keys to home, or a vehicle. She would need to find a phone to place the call to the police to report the crime. That would be step one. In addition, when someone is a victim like in this case, she might have been bewildered, and startled by what occurred. The age mentioned is in her 60's. We don't know if that is early 60s or later 60s. Changes do occur both mentally and physically as we age. And, also, we don't know the victim's ethnicity or ability to function in English. Some cultures approach issues as such differently than others. Please don't throw her under the bus assuming that she is scamming someone. And, if this were a scam, what kind of scam would it be reporting that your purse was stolen? What could she possible get out of it as a scam? Lastly, I know someone very close to me who would probably react this way, very confused and startled as to what occurred, especially if something like this never has happened to the person. Let's show a little kindness, and civility over the issue. It could be you one day.

Report Objectionable Content
Email Town Square Moderator
10 people like this
Posted by Mark Silverman
a resident of Menlo Park
on Aug 18, 2017 at 12:21 pm

>Remember folks, the purse contained her cell phone, and other personal items, perhaps like keys to home, or a vehicle. She would need to find a phone to place the call to the police to report the crime. That would be step one.

(1) A valid point that the others seemed to have overlooked. (2) The 'generic' description of the thieves probably means that the culprits will get away with this crime.

Report Objectionable Content
Email Town Square Moderator
5 people like this
Posted by Stew Pid
a resident of Community Center
on Aug 18, 2017 at 1:18 pm

@Anonymous and @Barbara:
A bit quick to judge. And cynical, are we?

No phone around.????? clearly you havent been to Stanford mall then.. Every store has a phone people. Hell everywhere you look theirs someone with a phone. On top of that she waited 3hrs.??????? The window to catch these waste of space is over. Good luck finding them..

Report Objectionable Content
Email Town Square Moderator
5 people like this
Posted by Unfortunate
a resident of Another Palo Alto neighborhood
on Aug 19, 2017 at 11:16 am

Sunday at 10.30am and there were no witnesses? Granted the mall is probably still quiet at the time of the morning, but still. Also, kinda wondering why she didn't run inside the McDonald's to report the incident immediately?

A's an aside, I have been approached as just after I got into my car at the mall, by someone who knocked on the drivers window and asked me for 'help' and when I asked what kind of help they needed, they said they needed money. I told them. I had no cash on me and left. I drove about a block and decided to go back and report the incident to security, because the incident was unsettling...kind of felt like am attempted mugging. It's one thing for someone to passively ask for money with a sign or what not, but it's something else when someone follows you to your car, and asks you for money. Feels very wrong. Mall security wasn't very helpful. Said they had had several reports like mine, but the Palo Alto police will not remove these folks from the premises, unless they actually commit a crime. So, be very mindful of who.migh be following you as you walk to your car. Oh, this happened on borax daylight.

That surveillance pic isn't very informative. (1) A 'back of the head' shot is useless.(2) It could be any small group of Afro-American shoppers at a mall (3) The only way the police can make any headway is through the misuse of any credit cards and/or unrelated cell phone usage.