Defendant scheduled to return to court on Oct. 11 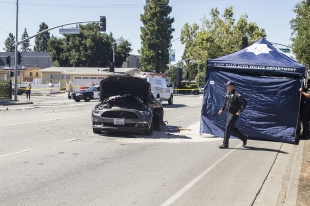 Officers of the Menlo Park and East Palo Alto police departments react to a three-car collision at the intersection of University Avenue and Kavanaugh Drive on June 16, 2017. Photo by Ben Hacker.