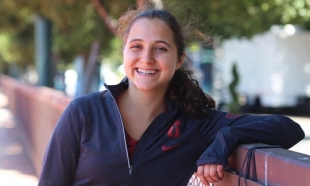 Courtney Smith, a two-time All-America distance runner at Harvard, will run for Stanford, beginning this fall.

Smith is a senior from West Chester, Pennsylvania, and majoring in chemistry. She has one season of cross country eligibility remaining and two in both indoor and outdoor track. Smith will strengthen a Cardinal cross country team that placed fifth at the NCAA championships last season.

In the 2016 calendar year, Smith won two Ivy League titles – in cross country and the indoor distance medley relay – earned first-team All-America honors with an eighth-place finish in the 5,000 meters at the NCAA Indoor Championships, and was 35th in the NCAA Cross Country Championships. That earned her another All-America honor by placing in the top 40.

The Cardinal cross country team reports on Sept. 3. After a week on campus, the team spends training camp in San Diego and opens its season at the University of San Diego Invitational on Sept. 16 at Mission Bay. The Pac-12 Championships are Oct. 27 in Springfield, Oregon, and the NCAA's are Nov. 18 in Louisville, Kentucky.

These local restaurants are donating meals to Bay Area residents in need. Here's how to help.
By Elena Kadvany | 6 comments | 11,085 views

Will the Coronavirus Save Lives?
By Sherry Listgarten | 29 comments | 3,862 views