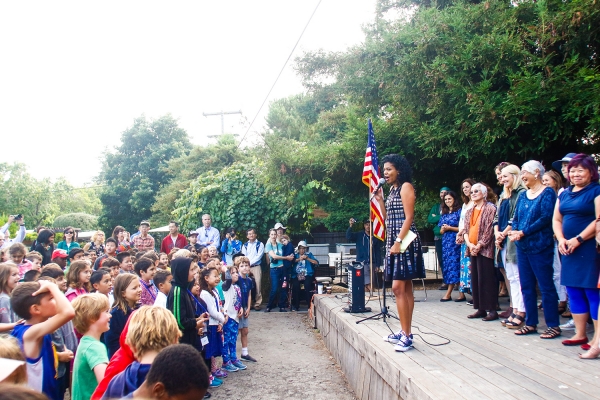 Dawn Yoshinaga, the new principal of Ohlone Elementary School, welcomes students as she stands with teachers and staff during the school's first-day-of-school "opening ceremony" on Aug. 15, 2017. Photo by Veronica Weber. 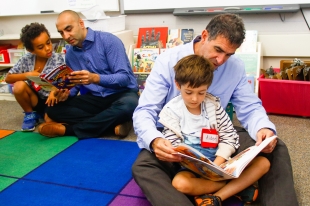 Ken Kuwayti reads to his son Aiden, right, in his kindergarten class at Ohlone Elementary School alongside fellow parents as they dropped off their kids on the first day of school on Aug. 15, 2017. Photo by Veronica Weber.

Opening day at Ohlone was FABULOUS this morning!!!!

I'm filled with great feelings for the new year. New principal, our new 4/5 teacher Dara Brady and lots of other new people around campus.

Hooray for Jordan in its new beginning and final year as JORDAN :-)

If the new Principal of Jordan wants to get a jump on Jordan's problems, she should march down to Paly and spend a day talking to students who have escaped.

A table on the Quad with a few dozen donuts would be time and money well spent.

Then get their emails and follow up as the place reveals it's true nature. Information is everything. You should look to your customers, not your employees to give you a true measure of how you are doing.

...oh yeah - and the Paly Teachers can also tell you which subjects are weak in the incoming students. (Cough cough English)

Report Objectionable Content
Email Town Square Moderator
3 people like this
Posted by Omom
a resident of Leland Manor/Garland Drive
on Aug 17, 2017 at 9:17 am

I only have elementary aged kids so I'm not as dialed into the middle schools. I'd be interested to hear about perceived problems at Jordan.

Report Objectionable Content
Email Town Square Moderator
4 people like this
Posted by Advice For Jordan
a resident of Community Center
on Aug 19, 2017 at 8:17 am

Ominous asks about perceived problems for Jordan. It's a huge question. Broadly speaking most of Jordan's issues are:

- too much pressure and stress on students. Teaching styles are all over the map, and there are some very good teachers. But there are also those who present and pressure. Basic formula is to dump all the learning into homework and just pressure kids to do tons of it to teach themselves. Tests are disjointed from classrooms as the teaching in class is minimal. Grading is a wide range from easy to high school level difficulty.

- Jordan is not made for students. Almost every aspect of student life at Jordan is a challenge. Not the good kind of challenge which has a clear goal, and you try repeatedly to build skills and conquer the challenge. Rather, Jordan's challenges to the students are a confused overlapping mishmash of demands from discoordinated teachers, departments and admin who all appear to work together to make school unsolvable, stressful, and a sleep deprived muddle.

What this does is destroy willpower and teaches helplessness. The very resilience needed to.navigate Jordan, Paly, and life is sucked out of kids. You see, when an earnest 6th grader tries hard, fails, gets no help, often no clear direction, no chance to try again (no time to try again) and works towards an ill defined pointless goal - they learn one thing: to give up.

Tha is repeated for three years across many (not all, but many) classrooms.

Oh, and there's bullying too.

Report Objectionable Content
Email Town Square Moderator
5 people like this
Posted by Former Paly Parent
a resident of Embarcadero Oaks/Leland
on Aug 19, 2017 at 9:44 am

@Advice for Jordan - Unfortunately, your child will be "well prepared" for Paly - although Paly is making efforts to get better.

Report Objectionable Content
Email Town Square Moderator
7 people like this
Posted by Experienced Parent
a resident of Jordan Middle School
on Aug 20, 2017 at 10:11 am

I've had three children graduate from Jordan, one last year. Don't let "Advice for Jordan" scare you too much. Jordan teachers rotate or leave quite a bit so the opinions of Jordan will vary. As with all education, the teacher can make or break the experience. Jordan and Paly stress all depend on the teachers. For my two older ones, 6th and 7th were insane and they had 4-5 hours of homework (due to teachers who are no longer at Jordan). There were 3 quizzes every week of the year in 7th and in 6th, projects were always looming in the background. My youngest had 2 years of no homework, and some homework in 8th. My regret is that I didn't contact the counselor for the 7th grade insanity and for 6th, we shouldn't have shot for "A"s. Remember that middle school grades don't matter, as they don't affect college admissions (I took this stance after that rigorous 6th grade year because I didn't want my child to burn-out prior to Paly). My 7th grade child also had a sport and was way too overstressed and completely sleep-deprived and depressed. Stand up for your child, don't worry about being labeled a "difficult parent" and experiencing backlash. Be sure to be professional and courteous, and go to the principal if the counselor doesn't care.

As far as bullying, there is very little in PAUSD. My children said that the best aspect of PAUSD is that there are so many nerds so everyone is nice. We did have one incidence of a non-resident bullying my child at Jordan and I reported it and admin and faculty were very concerned and they spoke to the parent and child (who they knew was an issue) and there was never an issue again. I don't know about the new principal, but Milliken was tough on bullying, the way it should be. Students should report bullying to admin if they witness it, because the school can't do anything about it if it's not reported. The bullying my children have seen is the academic bullying from the kids with immigrant parents so as long as your child isn't with those crowds, don't worry about bullying. The other bullying my children have seen is when the child has deficient social skills and provokes it, unknowingly. Parents should guide their children in social skills so their children know how to behave properly.

One thing that PAUSD could improve upon is the "No English in world language". In the first year, teachers should speak some English so they can teach children. My first two had the insane Spanish teacher (who is now at Paly, bless the children who have him) and he was a good teacher only if your child can make it through alive. Otherwise, he was so rigorous that many students dropped out due to the stress. I heard he prefers middle school where the grades don't matter.

I hope the new Jordan principal is good because we've had a couple of years of bad ones who were just figureheads. She might want to seek advice from Michael Millikan, who is superintendent of Belmont-Redwood Shores school district: Web Link