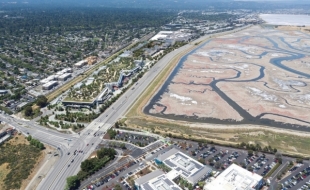 A Facebook-funded study of the Dumbarton corridor estimates costs for multiple projects to alleviate traffic in the area at $1.8 billion by 2025. Image courtesy Facebook.


Good for FB for funding that study. Question: why no mention of water-based options? Seems to me that whenever there have been transit strikes in SF that effect BART and other land-based transit options, the ferry service is augmented with great success. Why not enlist ALL the resources of the area?

Bicycling not recommended in the plan because we don't have 3 additional feet of right-of-way and clearly need both rail and bus.

Great idea if all these groups can work together. 20 years and who knows how many HUNDREDS OF BILLIONS before it's over on high speed rail to LA vs. 1.8 billion, eight years and for something helpful.

@Annette Ferry service in the South Bay would require frequent dredging. That means a cross-bay channel plus a north-south channel for initially deliver the ferries to the south bay. That might be why it was not considered. Or maybe, as you suggest, an oversight.

The Wikipedia article on the SF Bay says "Large ships transiting the bay must follow deep underwater channels that are maintained by frequent dredging as the average depth of the bay is only as deep as a swimming pool—approximately 12 to 15 ft (4–5 m). Between Hayward and San Mateo to San Jose it is 12 to 36 in (30–90 cm)."

On the other hand, water depth doesn't matter for hovercraft, but I don't know if those are a reasonable alternative. Probably more noise, less energy-efficient but faster than ferries. Maybe worth considering.

Report Objectionable Content
Email Town Square Moderator
2 people like this
Posted by Joe
a resident of Another Palo Alto neighborhood
on Aug 15, 2017 at 4:07 pm

One option that seems to be missing in the Weekly article is having FaceBook, and other of the large tech companies, move/open some of its operations to the East Bay. It's really not clear how these large campuses really increase the effectiveness of the individual worker in this facilities.


With high-speed data networking readily available to these companies, interaction can be achieved via these networks.

Report Objectionable Content
Email Town Square Moderator
3 people like this
Posted by Annette
a resident of College Terrace
on Aug 15, 2017 at 4:55 pm


@respondent - thanks for the info re ferry service and dredging. As I read what you wrote I also thought of hovercraft. That would be kinda cool; like the Shotover Jets in New Zealand. Not so good on a rainy day, though.

Seriously, I have a vague recollection of a boat option for getting to Big Game many years ago. It seems that with all our cleverness there should be a way to incorporate the bay into the commuting equation w/o doing irreparable harm.

Report Objectionable Content
Email Town Square Moderator
3 people like this
Posted by Another option
a resident of Adobe-Meadow
on Aug 16, 2017 at 5:55 am

Have they considered Hyperloop instead of heavy rail?

Report Objectionable Content
Email Town Square Moderator
1 person likes this
Posted by resident
a resident of Charleston Meadows
on Aug 16, 2017 at 6:04 am

The reason that Palo Alto lost it's yacht harbor was because of the constant requirement for dredging. You can't move dirt that is contaminated with engine oil from one place to another so that puts a squash on dredging. The lower part of the bay- it is too shallow to support a ferry service. Redwood City is the last stop to support a ferry service. The continual rearrangement of the lower bay in order to prevent flooding and salt flats has changed the way the bay originally worked.
Hurry up with the bridge for rail. That option has always been there and is such a good idea.

Report Objectionable Content
Email Town Square Moderator
1 person likes this
Posted by Resident
a resident of Another Palo Alto neighborhood
on Aug 16, 2017 at 6:56 am

My thoughts are that hovercraft ferries should not be dismissed.

I have been on them and they are fast and need very little infrastructure to support a service. I am no engineer but from what I have heard, modern hovercraft are a lot more environmental friendly as well as quiet than they used to be. I would imagine that a decent service with parking lots and support shuttles could be up and working relatively quickly.

Report Objectionable Content
Email Town Square Moderator
3 people like this
Posted by Marie
a resident of Midtown
on Aug 16, 2017 at 10:58 am


The time frame for these improvements are ludicrous given the immediate need. Really? It would take three years to add additional buses? Maybe that is because existing bus service is underutilized today. What is really needed is high quality private transit that can easily adjust to actual demand rather than more empty busses adding to global warming and using up taxpayer $ with no measurable impact on reducing traffic. If there was ever a public utility that would benefit by going private, it is bus service.

A helium-inflated/electric-powered blimp service across the bay. Park and fly with shuttle service to and from the terminal/landing strip.

Report Objectionable Content
Email Town Square Moderator
4 people like this
Posted by Mike Morris
a resident of another community
on Aug 16, 2017 at 4:30 pm

I live near Marsh road. To much traffic, noise, accidents everywhere, us 101, el camino, willow rd etc,. trains won't make anything better. Caltrain ridership is down, but they got $675 million the make it a big electric train, probably with no more restrooms on board,or drinking on board when it becomes electic. More people taking Über, carpools, ride share etc. but the officials want more money. Stop the crazy development of Facebook, this company is nothing but a Carpetbagger, enjoying the fruits of the democrat controlled state.

My husband commutes over the Dumbo to Fremont for work - a reverse commute. Not bad except for bridge toll - we have Fastrack.
Thanks, Mark Silverman, we love your idea.
I recall some sort of car/helo once upon a time...?