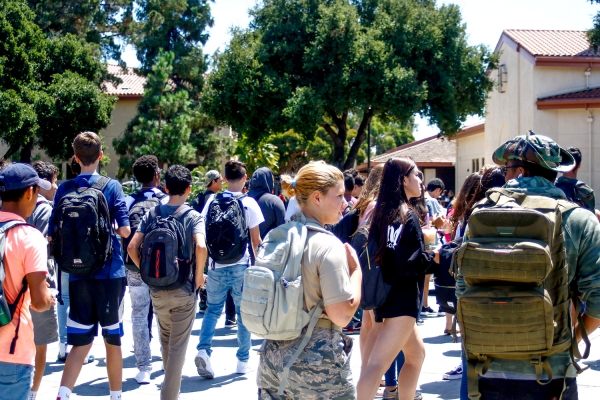 Students from Palo Alto High School walk back to campus after lunch at Town & Country Village on the first day back at school on Aug. 14, 2017. Seniors dressed up in camouflage. Photo by Veronica Weber. 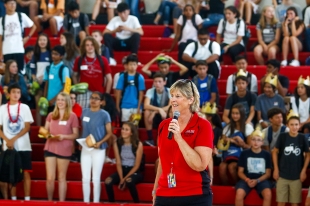 That is going to be nice.
Two of my nephews went to Paly and my niece.
It is a great school.

I recall starting the fall quarter in HS right after Labor Day. Now school commences in August? That only leaves about one month and a half of actual summer vacation.

Kids and teachers are getting screwed.


@Mark Silverman - Starts early, gets out early, no one gets screwed.

How wise is it really to allow taking 5 AP classes simultaneously? You don't think this adds tremendous stress to our kids?

Most high school kids, even in Palo Alto, cannot handle such, yet probably feel they need to do so just to 'keep up' with their peers. Shouldn't the school have policies restricting the number you can take at once? Like two?

Sure, some kids can handle the stress and the 5 AP class workload just fine. But that's like saying some kids only need 5 hours sleep.

Report Objectionable Content
Email Town Square Moderator
22 people like this
Posted by Parent no longer in PAUSD
a resident of Palo Alto High School
on Aug 15, 2017 at 6:21 pm

It is imperative that the Weekly does not make a student who is taking 5 APs and a heavy workload as something that all PAUSD students are striving towards or emulating. On a day when there is news of another tragic suicide we cannot speculate, but we should be careful to point out that there are lots of students who carry a workload that is not ridiculous.

Please do not add to the stress of our students by quoting those high achievers as the norm. Many struggle to get Bs and they are just as valid as quoting as those who aim high.

Report Objectionable Content
Email Town Square Moderator
8 people like this
Posted by john_alderman
a resident of Crescent Park
on Aug 15, 2017 at 6:27 pm


What a sad way to start the year. It does demand we address the course load students believe they need to take on.

Report Objectionable Content
Email Town Square Moderator
3 people like this
Posted by Gunn Parent
a resident of Barron Park
on Aug 15, 2017 at 6:35 pm

It is unwise and uninformed to associate the sad suicide somehow with course load. [Portion removed.]