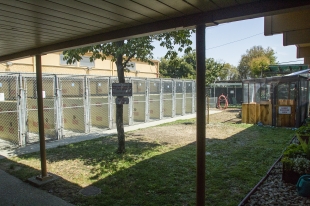 If the city hands over management of the Palo Alto Animal Shelter to a nonprofit, the city would be required to place five current employees on priority hiring for other city positions. Photo by Ben Hacker.


Does the new memo of understanding with Pets in Need include all services available to residents today? In particular, Pets in Need does not accept pet surrenders. They can't, they don't have the space or resources. However, it is a critical need for a community to have a shelter that accepts pet surrenders, sad as that is. When people move, when they become sick, when students go home, they will abandon pets if they have no other option. Sad as that is, it is reality.

An entire charity - Stanford Cat Network - was created partially to take care of the number of homeless cats regularly dumped by students when they went home.

While I think SCN is an amazing organization, as a community we need to provide a way for people to surrender pets, in a way that makes it likely that those that are adoptable, will be adopted. That requires that whatever shelter Palo Alto chooses, allows pet surrenders for residents. It is part of the service we pay for.

I might add that I have never surrendered or dumped a pet. I have always been able to keep them until they reached the end of their lives, usually at considerable expense. But I am aware of heart-rending situations that did require pet surrenders. And frankly, there are people who will dump pets, rather than take responsibility for finding a place for their pets. Very no-kill few shelters will accept them as there is rarely room.

Homeless animals, particularly cats, are problem in the Baylands, on Stanford campus and in many other areas of Santa Clara County. Palo Alto should continue to offer a solution to its residents and not contribute to more homeless animals. I know this is why we don't have a no-kill shelter. And as sickening as it is to euthanize an animal because there is no space to house it, it is better than abandoning a pet to the wilds and have it die by way of coyotes or starvation. And this is why I support the city using city funds to build a new larger animal shelter. I consider this just as important as a bike bridge. And I do not support outsourcing animal services unless they provide this service.

Flying: How to lower your impact
By Sherry Listgarten | 14 comments | 2,691 views