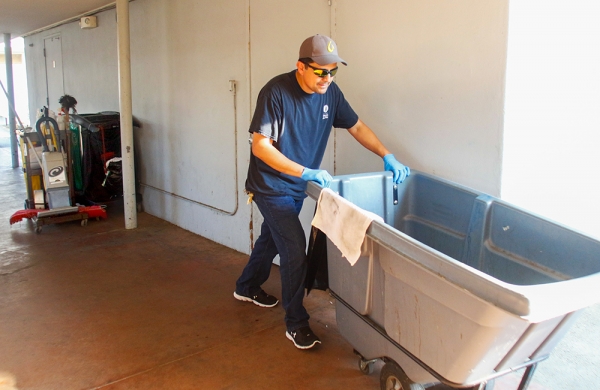 Jose Elizalde, custodian assistant for the City of Palo Alto, heads out to empty trash and clean the facilities at Cubberley Community Center on Aug. 8, 2017. Elizalde, an hourly employee with the city of Palo Alto, also works part-time for the Palo Alto Unified School District. Photo by Veronica Weber. 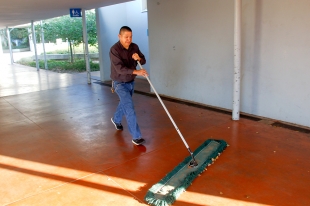 Hector Sanchez, custodian for the city of Palo Alto, sweeps the hallways at Cubberley Community Center on Aug. 8, 2017. There are four full-time custodians that tend to the 35-acre wide community center. Photo by Veronica Weber.

the service industry wages need to adjust to the cost of living here. perhaps, the city may want to consider hiring robots for cheaper labor.

Wonder how long it will take before the Social Justice Warriors will be demanding $20+ an hour, as well as health and pension benefits for these non-employees?

I wonder how much of that $10,000,000 actually goes into the people that are actually doing the work? That is the question.

Report Objectionable Content
Email Town Square Moderator
4 people like this
Posted by R. Winslow
a resident of Crescent Park
on Aug 12, 2017 at 1:35 pm

The janitorial contract will probably pass because the money isn't coming out of the City Council member's pockets...just the dupes who pay property/sales taxes, many of whom never or rarely venture into City Hall.

Report Objectionable Content
Email Town Square Moderator
4 people like this
Posted by Curmudgeon
a resident of Downtown North
on Aug 13, 2017 at 10:32 pm

"... the money isn't coming out of the City Council member's pockets...just the dupes who pay property/sales taxes, ..."

Last I looked, PA councilmembers must be residents. They pay taxes.

If Palo Alto's Taxpayers knew the TRUE per-hour-worked cost including wages, pensions (valued not under the ultra-liberal methodology employed by Public Sector Plans, but using the SAME assumptions & methodology that the US Gov't requires in PRIVATE Sector Plan valuations) current healthcare subsidies, and the annual cost associated with providing retiree healthcare benefits for it SAFETY workers........... they would like have a FIT ....... because it is without doubt very close to $150 PER HOUR.

Please Apply So We Can Reject You!
By John Raftrey and Lori McCormick | 6 comments | 2,667 views

City’s “priorities” have become meaningless – and a waste of time
By Diana Diamond | 12 comments | 1,411 views