Large group was under the branch just before collapse, according to Menlo Park Fire Protection District 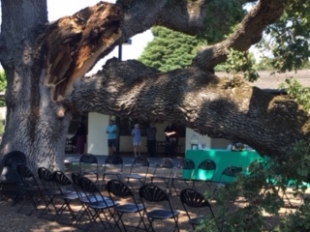 Can they sue Menlo College for personal injury, related trauma and time lost from work/school plus unspecified damages?

It would seem to be a case of negligence arising from a lack of maintenance.

Let's be smart and not hold events under heritage oak trees. Simple.

Report Objectionable Content
Email Town Square Moderator
2 people like this
Posted by get real
a resident of Midtown
on Aug 6, 2017 at 9:38 pm

Exactly. That one experience should negate thousands of years of human experience.

Report Objectionable Content
Email Town Square Moderator
10 people like this
Posted by resident
a resident of Midtown
on Aug 7, 2017 at 10:16 am

If this was a company event, any reasonable company (with help from their insurance company) will pay the medical expenses of their employees and invited guests. They can negotiate with the college's insurance company later. Since the company probably paid a huge fee to the college hold the event on the campus, there should be a legal contract that clearly spells out responsibilities.

I just hope that the infant does not suffer permanent injuries.

I cannot believe the comments here that are blaming the victims.

Report Objectionable Content
Email Town Square Moderator
1 person likes this
Posted by Tree lover
a resident of Crescent Park
on Aug 7, 2017 at 10:51 am

Whether you like it or not, sometimes "victims" do bear some responsibility. For example, an unlocked bike will most likely be stolen. The owner of the stolen bike qualifies as a victim, but still, locking the bike is a better guarantee of keeping the bike. It's better to take precautions and not be a victim.

The falling limb at the event at Menlo College was a disaster waiting to happen. Falling heritage oak trees this past winter and spring, following years of drought and then unusually heavy rain, have been widely reported in the news. I'm a little nervous every time I walk under one of the grand oaks. Given the news coverage of toppling heritage oaks, Menlo College never should have allowed the event to take place under the heritage oak on their campus, and the planner of the event also should have thought it out more carefully.

Years ago I attended an event in Menlo Park's Burgess Park under a beautiful, enormous heritage oak. I was very uneasy at the time, worrying about falling limbs and trees. This past spring that mighty oak split in half after the torrential rain and wind. Hopefully Menlo Park will wise up and no longer hold events under their heritage oaks.

'Are they ready for fully innovative Indian food?' Ettan arrives in Palo Alto with chaat, caviar and a secret menu
By Elena Kadvany | 0 comments | 3,592 views

Flying: How to lower your impact
By Sherry Listgarten | 11 comments | 2,561 views