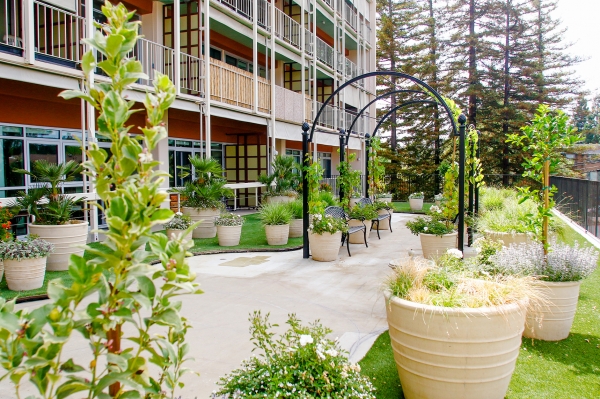 One of two newly installed rooftop garden terraces, features bench seating, an arbor, fountain, potted trees and flowers, and will feature tables for residents to sit outside. The terraces will officially open once a tile path is installed, most likely within a month or so. Photo by Veronica Weber. 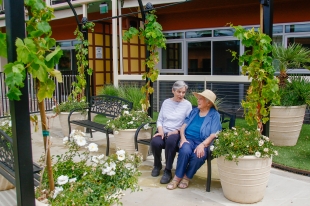 Eve Melton and Janet Creelman, both residents at Channing House apartments, sit and talk under the arbor in the new rooftop terrace gardens at the senior living complex on July 26, 2017. Creelman was one of five residents who steered the Garden Terrace Committee planning out its design and implementation. The gardens will be officially open once a tile path is installed, most likely within a month or so. Photo by Veronica Weber

vmshadle is a registered user.


I'm very happy for the residents of Channing House. Those moving from houses with gardens need no longer lose access to all green and growing things. I hope also that the professionals who maintain the gardens won't prevent those inclined to potter about from doing so.

It's altogether too easy to overlook the importance of the "grown environment" when considering the logistical demands of the "built environment," especially in urban areas. I hope that the residents will soon be joined by interesting birds and insects. (However, rats probably need not apply.)

Gardening is a great hobby for all ages and stress free!

Report Objectionable Content
Email Town Square Moderator
4 people like this
Posted by Anonymous
a resident of Duveneck/St. Francis
on Aug 8, 2017 at 12:34 pm

Excellent. If Facebook can have a garden roof, wny not also a retirement community?